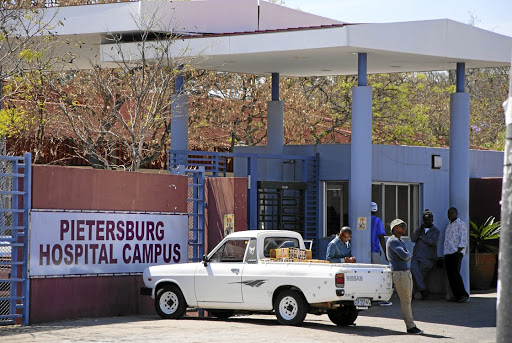 A surprise visit to Pietersburg Provincial Hospital by SA Human Rights Commission last week found food that had expired in February was still being fed to patients. / SANDILE NDLOVU

A surprise visit by the human right commission has revealed that expired food and medications are being served to patients at a major hospital in Limpopo.

Mavhidula said they were shocked to find food that had expired in February still being fed to patients.

"The situation was very much disturbing. If you are feeding patients expired food then you are violating their rights. What drives me crazy is that we thought all was well because this is an academic and referral hospital," he said.

Mavhidula said only two out of six laundry machines were working. He said the filing system was also a mess, adding that some patients who had travelled from far returned home without being treated.

"We are talking about people who are seriously ill," he said.

Mavhidula said this was reflective of the state of healthcare in the province. We are in a crisis," he said.

The revelation came at the time when members of the National Education, Health and Allied Workers Union (Nehawu) demonstrated outside the provincial health department's offices, demanding that conditions at hospitals be improved and that workers be paid R164-million worth of bonuses owed to them.

Adams said they decided to demonstrate outside the department's offices to show their dissatisfaction with the state of affairs.

He said the department had offered to set aside R90-million to pay bonuses owed to workers, but the union was demanding R164-million. "Let the department pay workers what is due to them," Adams said.

DA leader in the province Jacques Smalle said the health crisis was worsened by
the department's financial instability.

"Our situation is dire. We are limping and we are about to collapse," Smalle said.

The department had not responded to requests for comment at the time of going to print yesterday.

However, the national Health Department yesterday said they had started an intervention project to support struggling health facilities in the country.

Spokesman Forster Mohale said they took the reports about expired food and medication at the hospital seriously and would work with the provincial department to investigate the matter.

"Provinces and facilities are compelled to destroy any expired medical supplies and food instead of dispensing it to patients. As national, we will continue with visits to facilities to assist them to address the challenges they face," he said.

Mohale said in a statement this was in line with Health Minister Aaron Motsoaledi's announcement that 200 officials, including nurses, doctors and senior managers would be deployed to provinces to improve services.

The department made the announcement following the publication of the Office of Health Standards Compliance report based on assessment of 696 facilities which was tabled in parliament over a week ago.

Mohale said the project would be implemented in phases, starting with 44 facilities in seven provinces including Limpopo, Free State, Gauteng and Western Cape.

Some of the problems noted in Limpopo included that patients were not afforded privacy through doors, curtains and screens during consultations.

Mavhidula said up to three doctors were seen at the hospital consulting with patients inside one room.

In Limpopo, facilities like Rethabile Clinic, Tshilidzini, St Ritas and Jane Furse hospitals were listed. Mohale said these formed part of the 279 facilities found to be
non-compliant.