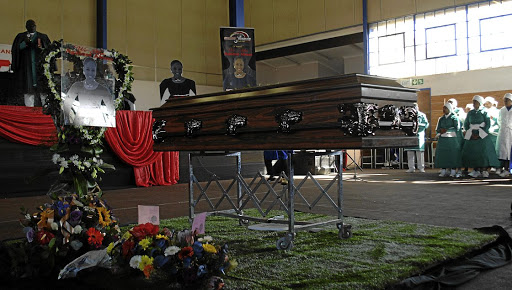 Thami Mbuyisa, the uncle of Nomsa Hilda Mbuyisa (inset), during her burial in Soweto at the weekend. The man who abused her has been arrested and charged with her murder.
Image: Ziphozonke Lushaba

Nomsa Hilda Mbuyisa believed that the man who would be her alleged killer would change.

Mbuyisa, 39, a mother from Soweto who was shot and killed allegedly by her ex-lover Hector Mdletye, would often be forced to drive out of her workplace in the boot of a car hiding from her abusive lover.

Her friends told mourners at her funeral service on Saturday of how her ex-boyfriend and the father of her three children had terrorised her.

Mbuyisa was killed in front of their 19-year-old son as she was about to board a taxi in Mofolo, Soweto, a week ago.

One of her friends, Sibongile Thusi, said the man followed her to work on a weekly basis.

"We called him 'Snikiniki' (an idiot). When we knocked off from work he would be waiting for her at the gate. We would worry about how she would get out.

"At times we would go back inside and ask assistance from our bosses. They would then put her in the boot of the car and drive out with her so that Snikiniki would not see her," said the friend.

Thusi said the abuse that Mbuyisa was subjected to affected everyone around her.

"We were all abused by him for years. When you abuse someone, you do not abuse that person alone. We worried about her all the time. She decided to get out of a [toxic] situation and he would not let her be. We did not think things will end like this," she said.

The man was arrested and charged with her murder.

Her family said she was abused by Mdletye for the 23 years they had lived together.

Another friend, Precious Makuzeni, said Mbuyisa believed that her lover would change one day. "She was a forgiving person. She would always say to us, 'please forgive him, he will change'. But we could see that he will never change," she said.

Shiko Mothupi remembered her friend as a loud and jolly person. "We called her 'Maglasana', because she wore glasses. We would go to Capello [restaurant] as friends every month end. She loved people and above all, her family. I can't stop asking myself why she had to die so suddenly."

Mbuyisa's neighbour Agnes Motaung blames the government for the scourge of violence against women, while Bishop Mandla Phakathi blames the justice system for the tragic incidents.

"Killers are made arrogant by our justice system because they set them free too early to walk among us. These people go and come back early, that is why they will tell you: 'I will be back'," Phakathi said.

The Soweto woman who lost vision in one eye after she was allegedly stabbed by her ex-boyfriend fears she could soon become a statistic in the ...
News
3 years ago
Next Article