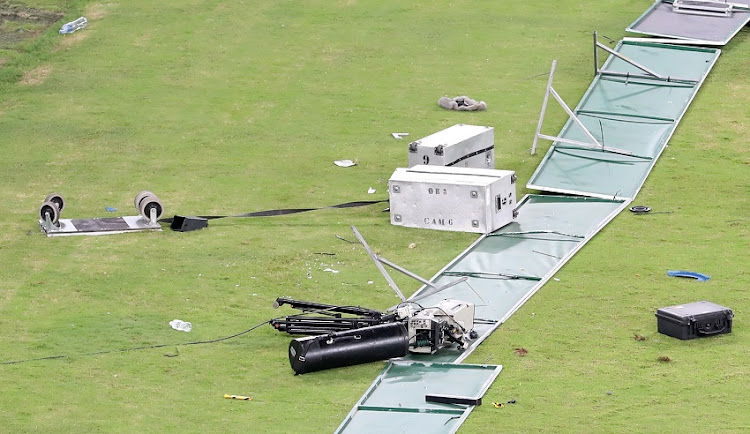 Eleven suspects arrested in connection with the vandalism that took place during a soccer match at Moses Mabhida will appear in court on June 26.
Image: Muzi Ntombela/BackpagePix

Police have netted an eleventh suspect following the stadium violence which erupted at the Moses Mabhida Stadium in April after Kaizer Chiefs lost to Free State Stars.

“He appeared at the Durban Magistrate’s Court this morning on charges on public violence and was granted bail of R1 000.

“He will join the ten other co-accused who were arrested prior to him.”

They are all expected to make their next court appearance on June 26.

Madiba is understood to have been caught on camera kicking security guard Sabelo Maziba in the face‚ while Memela and Khumalo are alleged to have been sighted tampering with camera equipment.

All were barred from attending any sporting fixture or recreational gathering until the finalisation of the court case. All have been released on bail.

The matter is expected to be referred to the regional court for trial.

Police and stadium security were overrun as fans invaded the pitch at the end of the game‚ heading directly for embattled Chiefs coach Steve Komphela‚ who quit immediately after the game.

The pandemonium left many people injured and property damaged. The damage to the stadium and technical equipment belonging to broadcasters is said to have amounted to millions‚ with some equipment pilfered.

Two vehicles parked at the back of the stadium were also damaged.

Soccer hooligans caused damage worth R2.6 million at the Moses Mabhida Stadium when Kaizer Chiefs lost to Free Stars on Saturday.
News
3 years ago
Next Article