Kids lose out on exams as community shuts schools 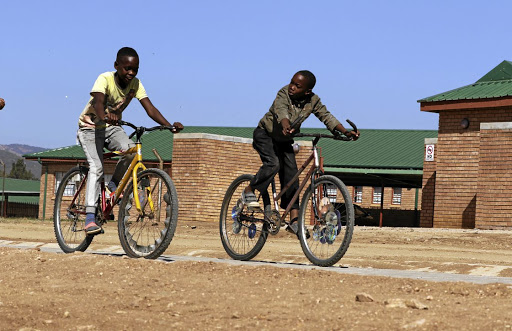 Pupils ride on the premises of Kiletsa Primary School in GaSekgopo where they just go to eat lunch.
Image: ANTONIO MUCHAVE

Residents of a Limpopo village shut down all schools in the area because of a dispute over the rightful heir to the throne.

Pupils from 13 schools in GaSekgopo, outside Modjadjiskloof, had not been to classes for two weeks. The community has blockaded the R81 - the main road through the area - with rocks.

The community is demanding that regent Josephine Sekgopo step down in favour of William Sekgopo, who they describe as the rightful chief.

Peter Moriti, chairman of the GaSekgopo Community Forum, said they ordered that schooling be suspended because the chieftaincy issue was everyone's business.

"Learning will resume after we have installed the rightful chief, William Sekgopo. What we are doing [is] we are fixing the future of our children by demanding the rightful chief to ascend the throne," he said.

University of Limpopo spokesperson put on leave over qualification

Mohuba faces probe over his doctorate
News
3 years ago

Moriti said they had been calling for Josephine Sekgopo to vacate the throne since she took over about 20 years ago but they were not being taken seriously so they resorted to shutting down schools.

He said pupils should respect the chief-in-waiting and join him in fighting for his position.

Another community leader, Sam Ramatshwela, said they wanted the current regent gone because she was not the legitimate chief as she married into the royal family and she is not of royal blood.

A Grade 11 pupil at Mohumi High School said they were told by a group of protesters that schooling would be suspended until the regent stepped down.

"They warned that they will come after those of us who continue to go to school. There is nothing we can do; we have to go and write exams because the exam timetable is already out. We do fear for our lives at the moment because they might come after us," she said.

12 years past date to eradicate system.
News
3 years ago

A Grade 5 pupil at Kiletso Primary said he had been to school this week but only for food. "I was at home and went to school during lunch. Throughout the week they were cooking at school and learners just get the food and go back home," he said.

"I have got two children in primary school; they've been roaming the streets for two full weeks. Whatever they are fighting for they should leave children out of it," Malahlega said. She is a hawker at one of the high schools, and said the protest had also affected her.

"I sell fruits, snacks and fatcakes. I have not been able to generate any income to feed my three children," she said.

Department of education's Sam Makondo appealed to the community to allow the children to return to school.

"The current protest in GaSekgopo has got nothing to do with education," he said.

Makondo said children who missed their exams would be afforded special dates to write.

Josephine Sekgopo said: "My 33-year-old son, Koma, is the rightful chief. We submitted our argument to the [Kgatla] commission last year." She said the commission would announce its finding today.