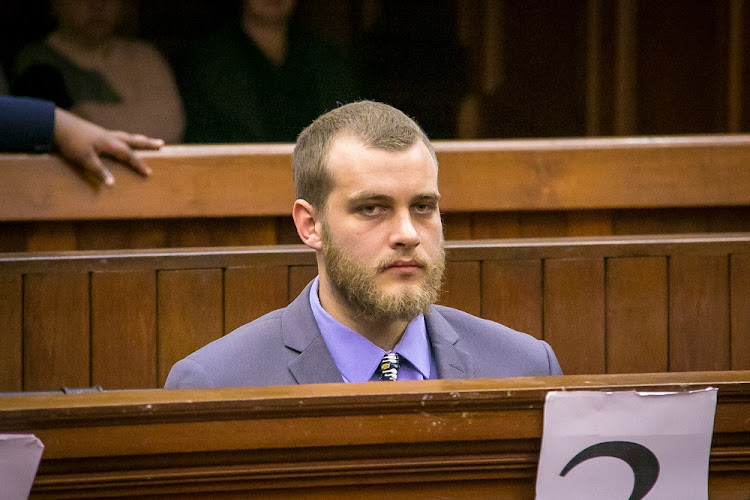 Henri van Breda was handed three life sentences on Thursday for the murder of three of his family members.

Delivering the scathing judgment at the Cape Town High Court, Judge Siraj Desai said that the murders were not only premeditated but were cold blooded as well.

Van Breda was found guilty on three counts of murder, attempted murder and defeating the ends of justice.

He received a life sentence for each of the murders [father Martin, mother Theresa and brother Rudi], 15 years for attempted murder on his sister Marli and 12 months for defeating the ends of justice.

He was found to be unfit to possess a firearm.

His leave to appeal the sentences will be heard on 27 June.

The judge said Van Breda had a bright future when he attacked his family at their home in De Zalze‚ Stellenbosch‚ in January 2015.

“Your future was not bleak‚ in fact it was bright. You had a supportive family‚ and they had the means to assist you in your future endeavours‚” he said.

“You have not told the court what precipitated these events that night. We know from an independent witness that there was an argument‚ a loud one‚ which persisted in your house for several hours.

“At best for you‚ we can assume that the crimes were not committed in a vacuum but were the product of some disgruntlement in the family.”

But he said the attacks‚ with an axe‚ involved a high degree of uncontrolled violence.

“These attacks display a high level of innate cruelty and an almost unprecedented degree of disregard for the welfare of one’s own family‚ one’s parents and siblings‚” he said.

“I say this with some regret: Although you are relatively young and with no previous convictions‚ your conduct warrants the severest possible penalties. Society expects no less.”

The axe triple murder case that rocked South Africa has come to a close. Henri van Breda was convicted and sentenced to three life terms behind bars plus and additional 15 years for attempted murder and 12 months for obstructing the ends of justice on Thursday June 7 2018. Van Breda's defense team have applied for leave to appeal the conviction and sentence.

To argue for a lighter sentence than the minimum of life in prison would be to admit to the heinous crimes.
News
3 years ago

COMMENTARY | We know Henri van Breda killed his family - but what made him do it?

Why did Henri van Breda hack his parents and brother to death with an axe?
Opinion
3 years ago

The only survivor of Henri van Breda’s bloody axe attack on his family‚ his younger sister Marli‚ will not comment on the guilty verdicts.
News
4 years ago
Next Article