Did the devil make him do it? Closing arguments begin in Diego Novella case 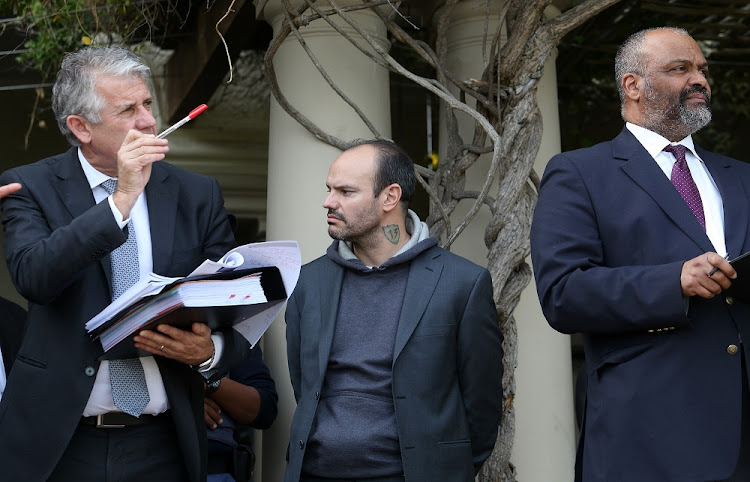 Diego Novella, who is accused of murdering Gabriella Alban at the Camps Bay Retreat Hotel in July 2015, visits the scene of the crime with his lawyer, William Booth, and Judge Vincent Saldanha in May 2017.
Image: Ruvan Boshoff

Family and friends of Gabriela Alban gathered in the Cape Town High Court on Wednesday nearly three years after she was killed to hear closing arguments in the case of her accused killer‚ Diego Novella.

Howdy Kabrins‚ Gabriela’s father‚ said they had friends from the United States in court‚ and some from Cape Town he had met in the years since his daughter’s death.

“I’ve done everything I can to build a network of people that are part of the community who are concerned‚” he said. “The spirit is that they’re like the conscious of the court.”

Kabrins has been there for every day of the trial‚ which has dragged on for well over a year as the defence tries to prove that Novella was incapacitated at the time of the murder due to drug use.

A key issue for Judge Vincent Saldanha will be to what extent the drugs Novella took caused him to be incapacitated.

A Guatemalan accused of murdering his American girlfriend in Camps Bay started testifying in his own defence in the High Court in Cape Town on ...
News
4 years ago

Novella is accused of killing Alban in July 2015 in what he says was a drug-induced “psychotic-like” outbreak. The wealthy Guatemalan national was arrested hours after Alban’s body was found in the Camps Bay Retreat Hotel.

“One of the more difficult areas in our criminal [process]… admittedly‚ is when there is a challenge to the criminal capacity of the accused‚” Saldanha said.

The 39-year-old Alban was found dead in the room she had shared with Novella‚ with faeces and a note reading “cerote”‚ meaning “piece of s**t” in Spanish‚ found on her body. Before closing arguments started‚ Saldanha asked William Booth‚ Novella’s attorney‚ to further explain their defence that the accused was criminally incapacitated at the time of the murder. Booth walked a thin line in doing so as he argued that Novella was not pathological‚ but was incapacitated due to the substances he took.

Novella’s substance intake — which included cannabis and THC‚ among other drugs — caused him to believe that Alban was a demon‚ Booth said.

Booth said that because no blood test or formal sobriety test was done of Novella after Alban’s death‚ there was no way to objectively tell how incapacitated he was.

Saldanha wasn’t having Booth’s reasoning‚ and at times couldn’t help but smile as Booth performed linguistic gymnastics to not say that Novella was psychotic‚ but that his state was “psychotic-like”.

Saldanha grilled him on why Novella saw only Alban as a demon‚ and not other people he interacted with while under the influence of the substances.

“I don’t think the law in any other country recognises a defence of ‘the devil made me do it’‚” Saldanha said.

During his portion of the closing arguments‚ state prosecutor Mornay Julius contended that the drug use and their effects had been exaggerated by the defence. Julius explained Novella and Alban’s relationship‚ characterising it as “complex‚” as Novella’s care for Alban while she dealt with symptoms of Lyme disease often led to tension between the two. He also went into detail about Novella’s past history of drug use‚ calling the accused a “chronic user” of cannabis who should have been used to its effects.

Final arguments will continue on Thursday.