Henri van Breda to be sentenced 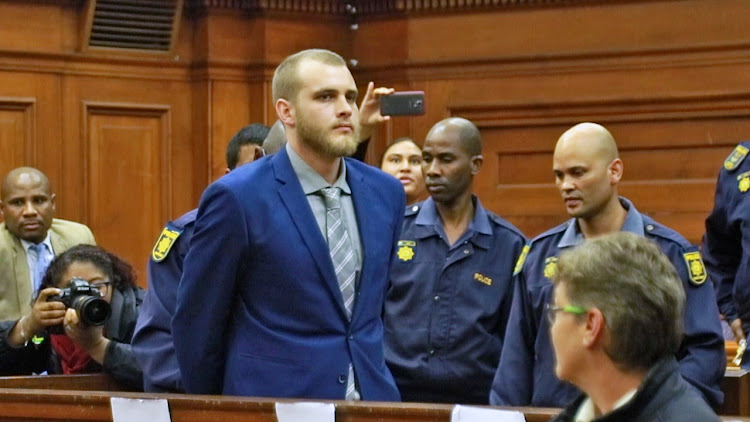 Henri van Breda was found guilty on three counts of murder on his parents and brother, attempted murder on his sister Marli and defeating the ends of justice.
Image: Anthony Molyneaux

It is almost two years to the day since Henri van Breda was arrested for the gruesome murder of his parents and the attempted murder of his sister at their luxury estate home in Stellenbosch.

Now‚ the time has finally come for him to hear the fate that awaits him after being convicted on May 21 for the murder of his parents and brother and the attempted murder of his sister in the Cape Town High Court.

Sentence will be handed down on Tuesday to the 23-year-old‚ who has already passed into a prison system that gives birth to both fact and fiction for those on the outside.

A weekend newspaper reported that Van Breda had been attacked by five inmates on his way into the hospital section at Pollsmoor Prison. The inmates allegedly ripped a metal condom dispenser from the wall and hit him. Another was said to have intervened and stopped the fight. This was according to his instructing attorney Lorinda van Niekerk.

The Department of Correctional Services‚ however‚ has flatly denied the incident‚ calling it fake‚ according to another newspaper group.

Van Breda's trial lasted for a gruelling 67 days and likely drained over R5 million from the family trust. It all came to nought‚ however‚ when Judge Siraj Desai spent a day last month reading out his judgment summary statement and said he could come to no other conclusion than the one that put Van Breda at 12 Goske Street at De Zalze Estate on 27 January 2015‚ wielding an axe and wiping out three of his family members.

The only survivor of Henri van Breda’s bloody axe attack on his family‚ his younger sister Marli‚ will not comment on the guilty verdicts.
News
4 years ago

COMMENTARY | We know Henri van Breda killed his family - but what made him do it?

Why did Henri van Breda hack his parents and brother to death with an axe?
Opinion
4 years ago
Next Article