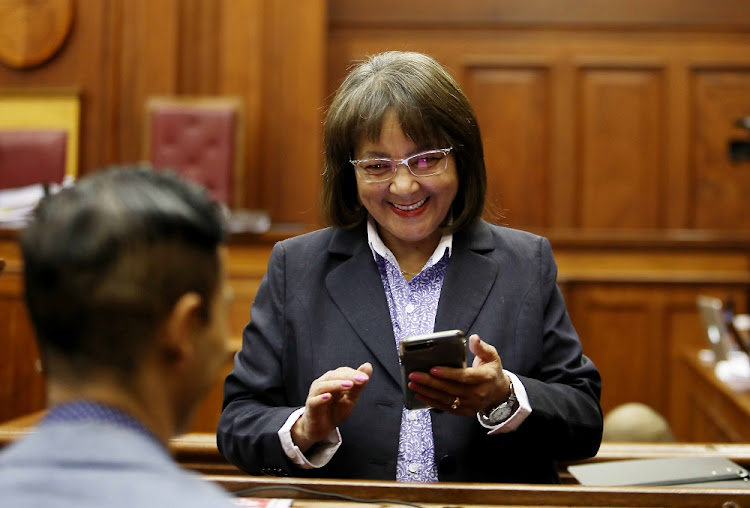 Patricia de Lille is in court fighting to keep both her DA membership and position as Cape Town mayor .
Image: Esa Alexander

The DA came out with guns blazing on Tuesday in its defence of the so-called “cessation clause” it invoked to fire Patricia de Lille.

The embattled Cape Town mayor is challenging the constitutionality of the clause in the High Court in Cape Town‚ where DA counsel Sean Rosenberg told the full bench hearing the lawsuit that the clause is designed to ensure loyalty of party members.

“We will submit that the purpose of the clause is intended to ensure public commitment‚” said Rosenberg.

“Anybody who publicly declares that she or he intends leaving the DA can no longer be a member of the DA.

“It is to protect the party from disloyal members‚ particularly members who occupy high positions.”

Patricia de Lille’s counsel has accused the DA of being so desperate to remove her that it resorted to fraudulent means.
News
3 years ago

Rosenberg said the party’s constitution is contractual and “people joining a party comply with the rules”. He said the party’s federal executive determines whether a member has‚ indeed‚ made public her declaration of intention to resign.

Earlier‚ De Lille’s counsel Johan de Waal sought to explain what she meant in the April radio interview with Eusebius McKaiser which cost her her membership.

“She started off with the word ‘there’‚” said De Waal. “ ‘People don’t want me there for whatever reason’. And she says no one from the public has said ‘they don’t have confidence in me’.

“We can argue this until the cows come home but we can’t get a clear‚ unequivocal intention to resign. She keeps on talking about serving ‘there’. What is the rationale for allowing someone to retract and [explain]?”

The DA stripped De Lille of her executive powers last week‚ and she now has to consult the mayoral committee on every decision.

Announcing De Lille’s axing last month‚ James Selfe‚ the DA’s federal chairman‚ said her announcement during the interview with McKaiser on Radio 702 on April 26‚ that she would resign from the DA after clearing her name cost her her membership.

Embattled Cape Town mayor Patricia de Lille’s counsel says the legal battle between her and the DA is a waste of the court’s time.
News
3 years ago

Selfe said the DA had invoked a section of its constitution saying: “A member ceases to be a member when he or she … publicly declares his or her intention to resign … from the party.”

De Lille told the party‚ when confronted about her utterances‚ that she was referring to resigning as mayor‚ but the DA’s federal legal executive found that the context showed she intended to leave the party.

Selfe said after the executive decided De Lille’s membership had ended‚ the disciplinary hearing she faced for alleged misconduct was no longer necessary.

Last month‚ the court gave De Lille a minor reprieve by ordering that she can continue in her position until the determination of the constitutionality of the cessation clause. The hearing continues.