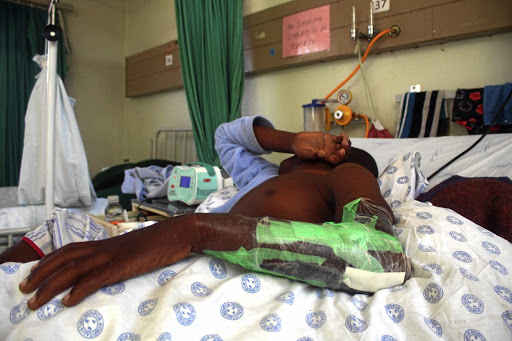 About 50 nyaope addicts have been operated on at Dr George Mukhari Hospital in since February last year. Almost all tested HIV positive.
Image: KABELO MOKOENA

An escalating number of nyaope addicts who take the drug by injecting themselves have to undergo arm surgery to avoid amputation or even death.

More than 50 addicts have been operated on since February last year. Even more shocking was the fact that almost all of those who underwent surgery tested HIV positive.

This was according to Sefako Makgatho Health Sciences University's Professor Sikheto Samuel Golele.

Golele, who is also a medical doctor at Dr George Mukhari Hospital in GaRankuwa, north of Pretoria, said addicts' arms become infected as a result of injecting themselves with the drug and engaging in a dangerous practice called "bluetooth", which involves the sharing of blood.

Golele and his team performed the surgeries on the addicts at the hospital.

"The rate is a bit shocking. Every week we have to operate on addicts and the numbers are going up.

"Before, we used to see one or two cases but now it is an everyday activity," a concerned Golele said. 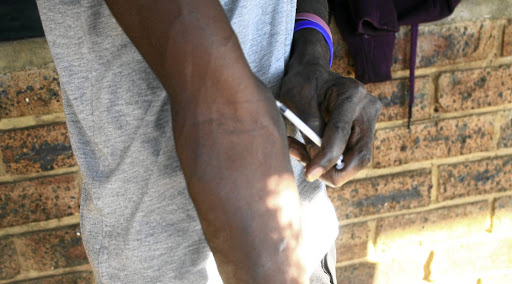 He said two people had their arms amputated recently while five other addicts died. About 10 of them had their fingers amputated because of severe infections.

Golele said the youngest patient at the ward was 14 years old and the oldest 39 years old.

He said the practice of injecting the deadly concoction laced with rat poison, antiretroviral drugs and heroin causes users to develop abscesses in unusual
areas, such as the elbow joint.

He said the infection destroys tissues surrounding the veins. As a result, Golele and his team are forced to perform the procedure, which takes about 45 minutes, in order to remove the dead tissue.

Golele said this was putting a lot of pressure on resources at the hospital as they have
other patients such as diabetics who need micro-arm surgery.

He said the cubicle dedicated to such patients has six beds, and in some instances all the beds end up being occupied by nyaope addicts.

Golele said some patients came into the hospital in a state of shock and had to be stabilised. He said most of the addicts try to quit the drug after the experience of almost losing an arm. After surgery they have to go through a rehabilitation process involving social workers.

While the chemicals used to make the drug result in negative effects such as body aches, dramatic weight loss and anxiety, Golele said HIV was also a huge concern.

He said more was needed to curb the scourge by educating communities and getting young people involved in positive activities.

"When I look at these patients I see my own children ... I see another child in trouble," Golele said.

Nomaswazi Luvhengo is trapped in a hellhole of nyaope addiction.
News
4 years ago

Hope in the midst of drugs and hard living

Tshepiso Khumalo left her home in KwaZulu-Natal as a 20-year-old, dreaming of escaping her small town for the big city.
News
4 years ago

The scourge of nyaope sweeping across many townships is taking a toll on families leaving many of them broken. Several mothers have told how they ...
News
5 years ago

'Bluetooth' nyoape addicts ask for help to get off the drug

Almost 250 substance abusing youth in Mabopane and Soshanguve have volunteered to be rehabilitated‚ with the help of state facilities. This is ...
News
5 years ago
Next Article