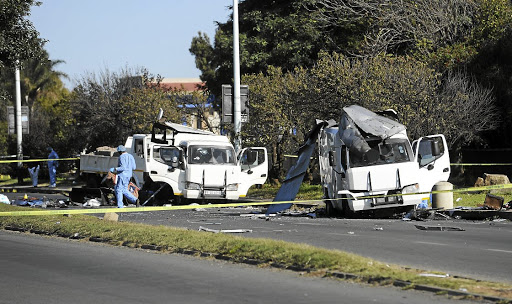 Due to lack of control in the mines, robbers find it easy to access explosives for heists, a study says.
Image: Gallo Images

Easy access to explosives and corruption in the police system are some of the reasons for a dramatic increase in cash-in-transit heists, a study has found.

Dr Mahlogonolo Thobane, who focuses on criminology, found that due to a lack of
control in the mining sector, robbers find it easy to access explosives for heists.

"The ramification of armed robberies is currently costing the banking and cash-in-transit industries vast amounts of money, not only in cash being stolen but also due to money being spent on fighting this crime," Thobane found.

"The expenditure of these industries on target hardening and surveillance measures is radically increasing as perpetrators become more professional and sophisticated."

Tefu claims car was taken in a bogus pick-up.
News
4 years ago

The 2014 study is titled The criminal career of armed robbers with specific reference to cash-in-transit robberies.

On Wednesday, the Seshego Regional Court in Limpopo jailed three mineworkers for dealing in explosives.

Captain Matimba Maluleke from the Hawks said they could not rule out a possibility of a link between the dealers and the rise in cash-in-transit heists since the crime was often operated by syndicates.

"The sentencing comes at the time when the province and the country are experiencing an upsurge in cash-in-transit heists and commercial explosives are reportedly being used in a commission of these serious crimes," Maluleke said.

Easy access to explosives and corruption in the police system are some of the reasons for a dramatic increase in cash-in-transit heists‚ a study has ...
News
4 years ago

Have you ever wondered how much money is recovered in botched cash-in-transit heists or when suspects in these heists are arrested?
News
4 years ago

Cash-in-transit heists have spiralled out of control, occurring at a staggering average of at least one per day.
News
4 years ago
Next Article