45% of dope users in Tshwane HIV-positive 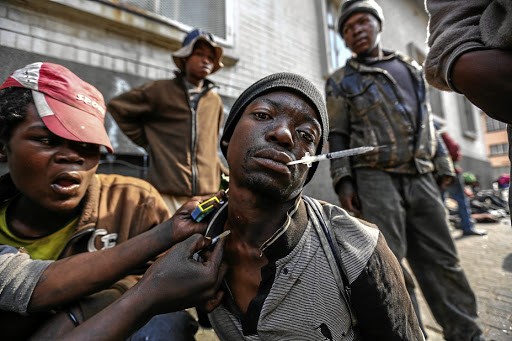 According to Pretoria University researcher Shaun Shelly, the major cause of death among drug addicts in South Africa is not overdosing and drug poisoning but HIV-Aids-related complications, untreated TB and hepatitis C. / Moeletsi Mabe

Almost half of people in the Tshwane area who inject themselves with drugs are HIV positive while more than 90% contract hepatitis.

This is according to University of Pretoria researcher at the department of family medicine Shaun Shelly, who has been conducting extensive research on the health impacts of drug abuse in the area.

Shelly said their research showed that 45% of drug users who use syringes in the area contracted HIV.

He said they also discovered that nyaope users were prone to an illness called infective endocarditis, which is directly connected to needle sharing.

An escalating number of nyaope addicts who take the drug by injecting themselves have to undergo arm surgery.
News
3 years ago

The disease is characterised by a bacterial infection which attacks the heart muscles resulting in complications such as fever, strokes and kidney failure.

"The problem is that when there aren't enough needles around people end up sharing them," Shelly said.

He said the major cause of death among drug addicts in South Africa was not overdosing and drug poisoning.

"They usually die from HIV-Aids-related complications ... they die from untreated TB and hepatitis C. Our latest research says about 45% of people in the Tshwane area who inject drugs are HIV positive and more than 90% have hepatitis C," Shelly said.

He said international studies reflected that people were six times likely to seek help when there were programmes to provide clean needles and syringes.

Shelly said given the opportunity, most people were willing to seek intervention and to change their habits.

"But nobody can resolve an issue when they are dead. We've got to try and keep people alive and as healthy as possible to show them that there is hope," Shelly said.

Nomaswazi Luvhengo is trapped in a hellhole of nyaope addiction.
News
3 years ago

He said the "bluetooth" trend was growing but many people were not aware that it was impossible to get high through injecting yourself with another person's nyaope- laced blood.

"It's amazing what the mind can do because the effects are purely mental," Shelly said.

Spokesman for the national Health Department Forster Mohale said they were concerned about the HIV rate among drug users. "The Department of Health is aware of the new illegal drug-sharing method called bluetooth and this contributes to the transmission of HIV and other diseases," Mohale said.

He called on communities to join hands with government to spread awareness about the deadly effects of the practices.