Hospital cans surgeries due to strike 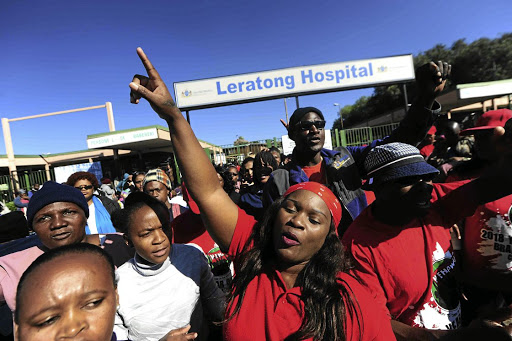 These Nehawu members were among workers who abandoned their posts at Leratong Hospital, Mogale City, leaving patients in limbo. /Thulani Mbele

Some surgeries at a Gauteng hospital had to be cancelled yesterday as workers shut down the facility amid demands for the provincial health department to pay them their bonuses.

Workers under various unions including the Democratic Nursing Organisation of South Africa (Denosa), the Public Servants Association, and the National Education, Health and Allied Workers Union (Nehawu), had shut down the Leratong Hospital in Kagiso in the West Rand.

Concerns over the nonpayment of performance bonuses had been an ongoing issue with union leaders previously camping at the department's head office to get their grievances addressed.

Yesterday, the hospital's CEO Grey Dube said elective surgeries had to be postponed while they could only attend to emergency operations. Dube said the provincial department should comment on issues of bonuses. However, the department had not commented by the time of going to print yesterday.

A protest erupted at the Charlotte Maxeke Academic Hospital in Johannesburg on Thursday.
News
3 years ago

Nehawu shop steward Eazy Mokawane said: "We are not going to allow anyone in or out. We have decided that the workers should not continue to serve the interests of the employer without getting what's due to us."

He said the shutdown would continue should the department fail to pay.

Denosa's Duncan Rampa said the situation inside the hospital was chaotic with patients not getting their meals. "The cooks are here. No one is cooking and patients can't buy food because the shops are closed," Rampa said.

He said staff members in the wards were exhausted as they were prevented from going home in the morning having worked their night shift.