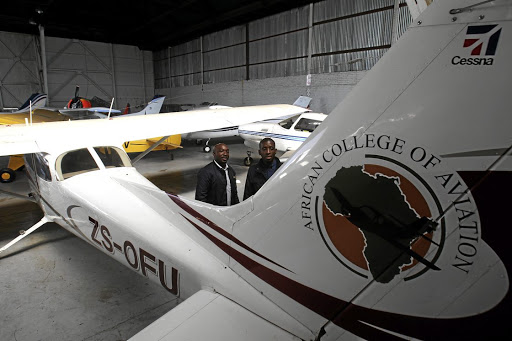 Humphreys Shumba and Mpho Tlhako's dreams of flying failed to take off when their aviation school shut down while owing them money they paid for flying and tuition./ SANDILE NDLOVU

Dreams of flying came crashing down as a black-owned Gauteng aviation school shut its doors, leaving dozens of students high and dry.

The African College of Aviation, founded by Asnath Mahapa, the first black female commercial pilot in South Africa, shut down while owing students thousands of rands.

Mahapa admitted yesterday that she owed students money, but blamed the Department of Transport's Transport Education Training Authority (Teta) for failing to pay R2.5-million in fees for about 20 students it sponsored.

"I do owe the students as a consequence of the nonpayment by government as I had a contract with them to train the students," she said.

Mahapa said Teta had not honoured the contract. "Since signing the contract, Teta has not paid for accommodation and the extra flights that the students have done, it only appeared towards the end of last year that this is a big problem," she said.

Mahapa said Molefe, who backed her financially, left due to "money no longer coming in" as Teta reneged on the agreement. She said Molefe was "more of a silent partner."

Molefe said yesterday he was only involved in an "advisory" role at the school.

He said he left the school because he had "a lot on my plate at the time". He denied that he owned the two planes but refused to divulge who owned them, saying it was "confidential".

When Sowetan visited the school at the Rand Airport in Germiston yesterday, the offices were locked and empty.

The school's branded aircraft were gathering dust in one of the hangars.

One of the students, Kelebogile Mabote, 35, joined the school in June after paying R20000 but had only amassed one hour of flying.

"Even the study material I received was incomplete, every time I wanted to book a flight they told me they don't have aircraft," she said.

Mabote said it was disappointing that Mahapa was ignoring her calls and messages about the R18000 the school still owed her.

Humphreys Shumba from Malawi also worked at the school as a flight operator, while trying to complete a commercial pilot's licence.

Mahapa said she was forced to haul Teta before court in an effort to recover what she was owed.

When asked why she had not been communicating with her students, Mahapa said: "I don't actually have answers for them."

Teta had not responded to Sowetan's questions at the time of going to print.