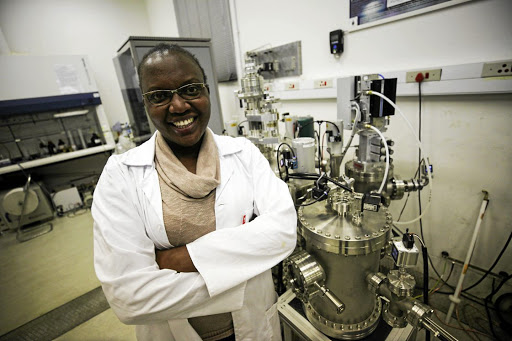 Nanotechnologist Siphephile Ncube is a researcher at the University of Witwatersrand's school of physics. In July she graduates with a PhD degree. /Alaister Russenll

After four years of research for her PhD in physics, Siphephile Ncube has joined an elite group of technologists in Africa after she developed a unique way to make computers, cellphones and calculators work faster without crashing.

Ncube, 35, who will graduate from Wits University in July, led a team of five researchers at the Nano-scale Transport Physics Laboratory at Wits, one of the elite quantum physics centres in Africa.

She has successfully attached extremely small magnets to microscopic materials called carbon nanotubes to transport electrons that send signals to a computer to switch on, operate longer and faster.

Carbon nanotubes were discovered by Japan in 1993 but technologists have been unable to find a way to use them to the degree that Ncube has reached.

"We are entering a new technological era. This means technology is getting smaller but new inventive ways are needed to make sure that it can be more efficient," she said.

"We are hoping that these materials can replace the current silicone-based electronics. Silicone is prone to overheating which is why computers crash. Every technological comfort that we have today uses silicone," said Ncube.

She said nano-electronic materials were stronger than steel, more durable and less likely to succumb to heat.

"The field changes daily. You need to ensure that you're doing something that has never been done and that will be relevant," she said.

Ncube said she has faced moments of self-doubt but has not allowed them to deter her from the end goal.

"When I found a challenge that I felt was unmovable I would sleep it off. The next day I would find a way forward."

Her supervisor Professor Somnath Bhattacharyya said Ncube was one of the first female nanotechnologists in Africa. "Siphe is in a male-dominated profession and I hope her success will give more female students opportunities."

Ncube's advice to young women who want to join the nanotechnology field is to be assertive and confident. "It is important to know it is a possibility that you can realise."