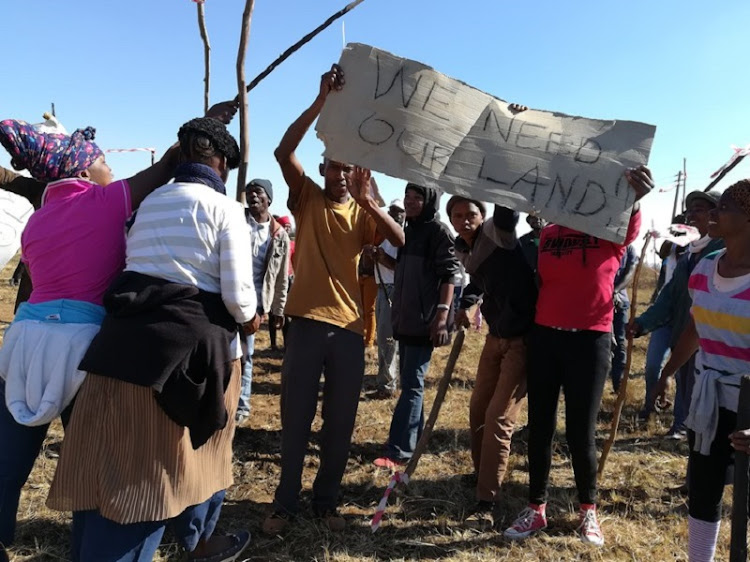 Protesters outside the Cremona Cheese Factory demand to be allowed to settle on vacant land owned by the factory.
Image: Zoe Postman

The owner of the land‚ Antonio Cremona‚ filed for an eviction order in April after the residents tried to occupy the land. The case was heard in the South Gauteng High Court and an interim eviction order valid until September was granted.

Some residents tried to occupy the land on Friday last week but the Johannesburg Metro Police Department demolished their shacks on the same day. The residents retaliated by setting one of the factory’s buildings alight.

The factory was secured with private security guards and dogs when GroundUp visited the area on Monday. Four police vans were parked outside the factory while the residents picketed.

Ward councillor Sylvia Monakale says she has received death threats from the occupiers. “They have threatened to burn my house and my office. But I stand firmly against these land grabs. Anyone who is involved in arson and damaging property should be arrested‚” said Monakale.

“We cannot wait until September. Because when September comes‚ they [the court] will postpone again and we need land now … We have nowhere else to live and we cannot afford to rent‚” said one of the occupiers who asked to remain anonymous.

A mother of three was among scores of Temba residents in Pretoria who were evicted from a piece of land they had illegally occupied since June last ...
News
3 years ago

She said she was unemployed and had three children to support. She is paying R350 rent per month but she can no longer afford it. “I also want my kids to have a home that they can call their own‚” she told GroundUp.

“This land has been vacant for about 23 years and there is no sign of development. We need this land for housing now…we are not asking anymore because we have been patient for 23 years”‚ she said.

Another occupier who also asked to remain anonymous said the land was a “graveyard”. He said criminals hid in the long grass and people had been murdered and raped in the field.

“This factory is in a residential area‚ so people walk through this property every day. It is not safe especially for the kids. There is no fence or security guards patrolling‚so it’s basically training grounds for criminals‚” he said.

Both occupiers said that Councillor Monakale had not addressed the community about the housing issue.

“The councillor is working with the factory but she doesn’t care about us. She says they want to build a shopping centre and housing but we don’t need that. We need land to build our shacks‚” said one of the occupiers.