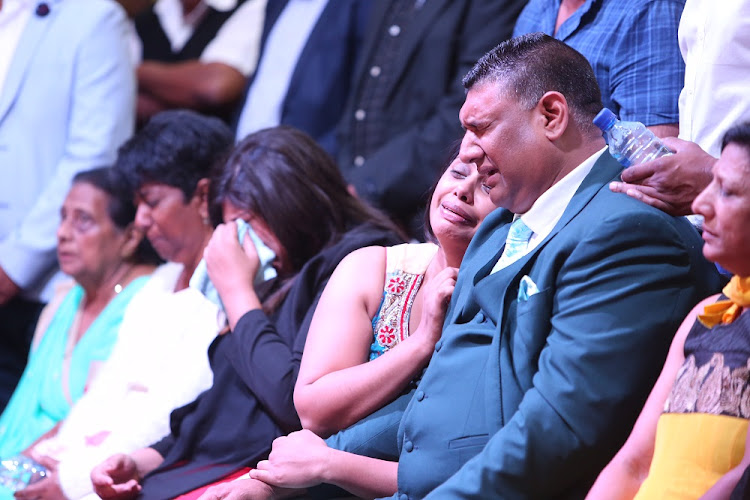 9-year-old Sadia Sukhraj was killed in a hijacking on Monday.
Image: Jackie Clausen

The haunting strains of a bagpipe heralded the arrival of a tiny white coffin bearing the body of slain 9-year-old Sadia Sukhraj at the Christian Revival Centre in Chatsworth on Tuesday.

An inconsolable Lorraine Sukhraj’s muffled cries of “my baby” could be heard as the pall bearers wheeled in the coffin while her husband‚ Pastor Shailendra Sukhraj‚ sat next to her with tears rolling down his cheeks.

About 2 500 mourners filled the church. They openly wept as a slide show of the 9-year-old’s short life played on the big screen. Photographs of the slain girl as a baby‚ at the beach with her parents as a toddler‚ her birthday parties and in her school uniform featured in the video tribute.

Dozens of mourners queued to glimpse the body of the child — wearing a tiara and a pink dress — before paying their respects to the grieving family.

A 9-year-old girl was shot in an apparent botched car hijacking in Chatsworth on Monday morning.
News
4 years ago

The 9-year-old had been with her father Shailendra on a school run on Monday when he was pulled from the car while in the driveway of her grandfather’s Shallcross home by three men‚ who then sped off with Sadia — her father in pursuit.

From whose gun the fatal bullet was fired remains veiled in mystery‚ as police investigated the shooting that followed after the hijackers fled in the car.

Their escape was cut short when they collided with a truck before losing control of the car‚ which spun and came to rest in a neighbourhood park. One of the men fled the scene‚ a second was arrested while a third accomplice died near the stolen car.

The injured girl‚ found lying in the car‚ is understood to have been rushed to the hospital where she later died.

Sadia was often referred to as “his princess” by her father on social media. The couple also have a seven-month old son.