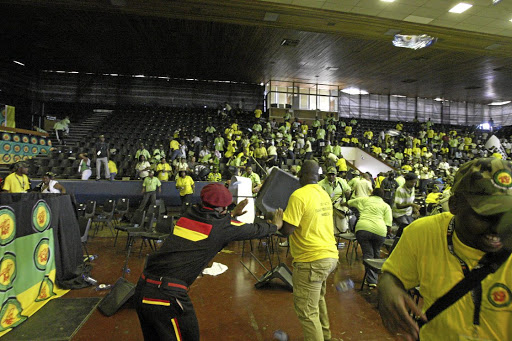 The race to succeed former Mpumalanga ANC chairman and current deputy president David Mabuza is getting dirty as party members carried guns to a regional conference this weekend.

At the conference held in Badplaas, some members stormed into the venue yesterday, demanding that the conference stop. They accused its leaders of allowing in bogus members.

The regional conference was set to elect a chairman to carry a mandate to the provincial conference on who should succeed Mabuza.

Quest for solution for power struggle in Eastern Cape.
News
4 years ago

An argument broke out with shots fired and the MKMVA member tasked to safe-guard the conference was shot.

According to Mpumalanga police, cases of murder, pointing of a firearm and malicious damage to property are being investigated.

"What we got is that a 47-year-old member of the MKMVA was shot dead by unruly ANC Youth League members who are believed to have been drunk and tried to disrupt an ANC Youth League meeting," said police spokesman Colonel Mtsholi Bhembe.

"Shots were fired on the scene, one man died from a gunshot wound."

"We can confirm that a member of the MKMVA who was tasked to safeguard the running of the conference in Gert Sibande was shot dead.

"For now, we are waiting for a formal report from the ANC Youth League," he said.

Supra Mahumapelo has disappointed his people, who now call him "greedy and corrupt".
News
4 years ago

Another ANC Youth League regional conference in Ehlanzeni region collapsed after arguments broke out over credentials and alleged bogus delegates on Saturday.

"What we got here is that the leadership of the league had bogus delegates. They wanted to steal the conference to make sure that they advance their interest to have Mandla Ndlovu as chairperson replacing Mabuza," said an ANC member supporting another contender, Peter Nyoni, to replace Mabuza.

The provincial general council has been postponed three times since December.

Those vying for the chairmanship include Fish Mahlalela, an MP, Peter Nyoni, who led a group opposing Mabuza's third term as chairman of the ANC, and current acting chairman Mandla Ndlovu.