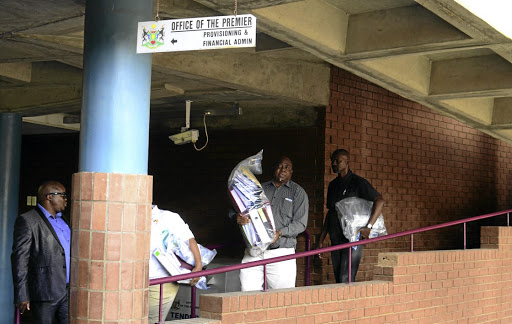 File photo of Members of the Hawks leaving with documents seized during the raid of the office of North West premier Supra Mahumapelo,
Image: TIRO RAMATLHATSE

The National Serious Corruption Investigation of the Directorate for Priority Crime Investigation is conducting a search and seizure operation at the Department of Rural Environment and Agricultural Development in Mahikeng in the North West province today.

He added‚ "The Hawks are confident that some of the legs in the investigations would be fast-tracked for speedy resolution."

The move comes a day after North West Premier Supra Mahumapelo announced that he was taking “early retirement” from his post.

His exit followed a meeting with African National Congress (ANC) leaders earlier this week and after a protracted political battle with his detractors in the province‚ who had been calling for his sacking for over three months.

The Sunday Times had also reported that Mahumapelo allegedly gave former president Jacob Zuma 24 cows and a bull as a gift worth R1.5-million in October 2016.

In March‚ the publication reported that a large team of Hawks officers had searched the Mafikeng offices of the provincial government. The unit was there as part of an investigation into fraud and corruption‚ said Captain Tlangelani Rikhotso.

It is understood that Hawks investigators searched the supply chain office that deals with procurement‚ and the financial office‚ among other departments.