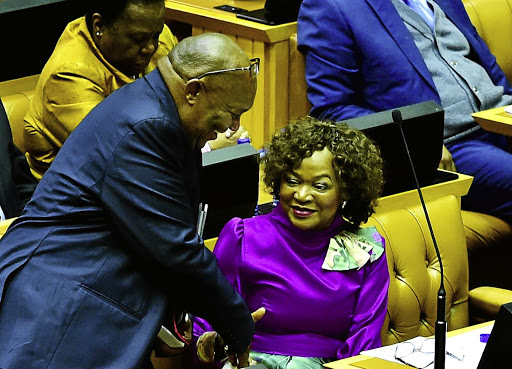 National Assembly Speaker Baleka Mbete and chairwoman of the National Council of Provinces (NCOP) Thandi Modise say parliament is now in a space to focus on key issues affecting people, rather than on personal attacks.

They were speaking to journalists ahead of their presentation of the budget of parliament for this financial year in both houses of the national legislature yesterday afternoon.

With the arrival of the EFF in 2014, parliament became synonymous with chaotic scenes that often turned violent. Julius Malema's party made it its mission to make life difficult for then-president Jacob Zuma, who eventually stepped down in February.

Modise said that until recently, parliament had been characterised by "flare-ups".

A service provider will conduct a study on the socio-economic implications of relocating the legislature from Cape Town to Pretoria.
News
3 years ago

"Do I sleep better now that uBaba [Zuma] has left? Not at all, our view is that it comes with the job, we must do what we do when we preside, we must try at all times to be as [little] emotional about what's happening on the floor as possible," said Modise.

"I am just happy that in the NCOP we now seem to be more focused on the topics and the issues that affect the people in the streets, unlike when we started in 2014 ... we tended to deal with each other, now we deal with issues."

Mbete said they were planning to conclude the amendment of section 89 of the constitution, which deals with the procedure to be followed by parliament when seeking the removal of a sitting president, as directed by the Constitutional Court last December.

She said the rules committee, which has been tasked with the matter since January this year, was expected to table a report in the National Assembly before the house takes a winter break in mid-June.

"At a point when we had had enough discussion in the rules committee, the matter went back to caucuses so that each caucus would as a collective deal with this matter..."

Parliament has been allocated a budget of R2.4-billion for the 2018/19 financial year.