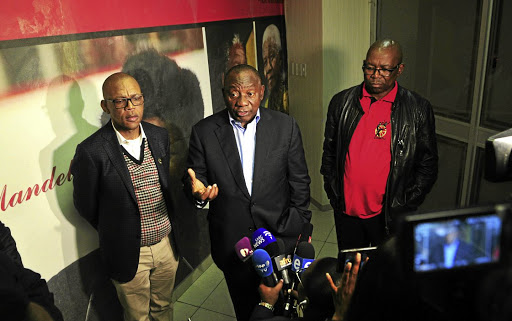 The honeymoon period for President Cyril Ramaphosa and Cosatu appears to be over with the trade union federation warning the president yesterday that its support depended on him introducing major changes to the value-added tax (VAT) regime.

In a behind-closed-doors meeting with Ramaphosa yesterday, Cosatu affiliates told the president that they want a number of foodstuffs and other goods to be zero-rated immediately in order to reduce the burden on the working class and the poor.

Ramaphosa was at Cosatu House in Johannesburg to address the federation's central executive committee (CEC). Former finance minister Malusi Gigaba announced the VAT increase in February to raise additional revenue in order to meet the budget shortfall, causing a rise in food prices, goods and services.

Among the items the trade unionists said must be zero-rated were water, electricity, school books and basic foodstuffs.

"The meeting was frank. We raised a number of issues, including the issue of privatisation and deaths in the mining sector. We told him we want expansion of zero-rated goods on VAT and subsidising of the most vulnerable," a CEC member said.

ANC secretary-general Ace Magashule has called on party members to join workers when they protest against the increase in value-added tax.
News
3 years ago

SA Democratic Teachers Union general secretary
Mugwena Maluleke warned that if the VAT increase was not reversed they were going to make it difficult for government to implement other programmes. "VAT is very devastating to ordinary working-class people and the poor. It must be reversed," he said.

Another CEC member said Ramaphosa did not make a commitment that the issues would be addressed.

"He told the meeting that the alliance political council, which is scheduled to take place soon, will discuss the issues raised further."

Ramaphosa said the ANC wanted to strengthen relations between its alliance partners.

"I must say that we have had a very good engagement and everybody is feeling very positive about how [we] are going to go about strengthening these relationships," he said.

"All those issues are going to be addressed. The important thing is that we are strengthening the platform for us to engage. Our engagement, even on the issues we may not see eye-to-eye on, should never be issues where the alliance is weakened."