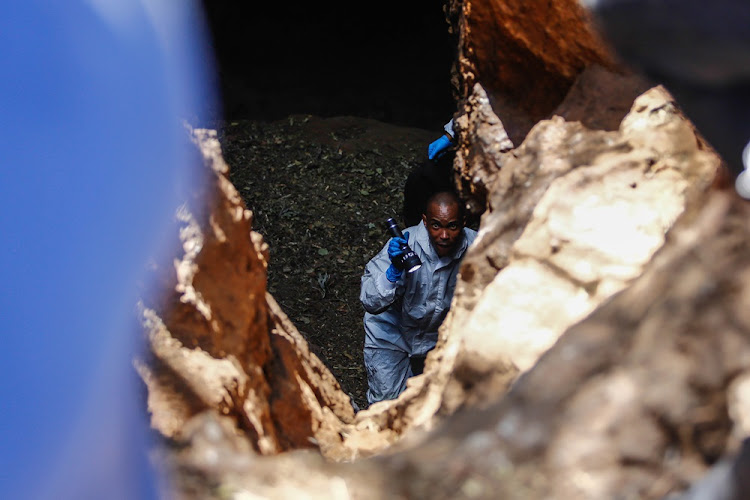 The body of a third man‚ suspected of being a Zion Christian Church congregant‚ has been found in a cave outside Pretoria.

On Tuesday police‚ after a 48-hour search and rescue operation‚ recovered the bodies of two suspected ZCC members from a network of caves in Hennops River Valley in Erasmia.

The latest discovery was made after the family of a missing ZCC member approached police early on Wednesday morning for help.

"It is much further back in the caves. It’s lying in a corner of a third room in the cave network. The caves are really dark‚ with lots of tunnels and passages‚ which is why we believe those who were recovering the bodies on Tuesday missed it."

She said the body was badly decomposed.

"From the information we have from the family‚ the person‚ who is also a man‚ went missing about a month ago. At this stage the cause of death is unknown."

Bodies found in cave believed to be murdered ZCC members

Tina Vanezis expected to find rubbish when she went to clean up a cave on her smallholding in Hennops River Valley - not two badly decomposed bodies.
News
4 years ago

She said that they were looking for two men for questioning in connection with the deaths.

"One of them has apparently told people he is a prophet. Our investigators are interested in questioning them‚" she said.

A police source said it was proving incredibly difficult to get the body out of the cave.

"You have to crawl through multiple tunnels and passages. It's so dark inside the caves you cannot even see your hand. Those who went into the cave this morning literally found it by accident.

"It is going to take quite a while to get it out."

On Tuesday police descended on the cave network after owners of the property‚ on which the caves are located‚ found the first two in a tunnel. The tunnel links two large caves.

The property owner‚ Tina Vanezis‚ made the discovery after she and a worker went to see if a trespasser‚ who is a self-proclaimed prophet‚ had left their property.

Vanezis on Tuesday told Times Select that the man‚ along with two assistants‚ had been living in the caves‚ which are a natural heritage site‚ for four months.

She said the man‚ who had allegedly threatened to kill her and her family‚ had told her that he had been sent by ZCC elders from the church's headquarters in Moria‚ Limpopo‚ to come to the caves and help church members.

Seputla Sebogodi tries his hand at marriage for fourth time