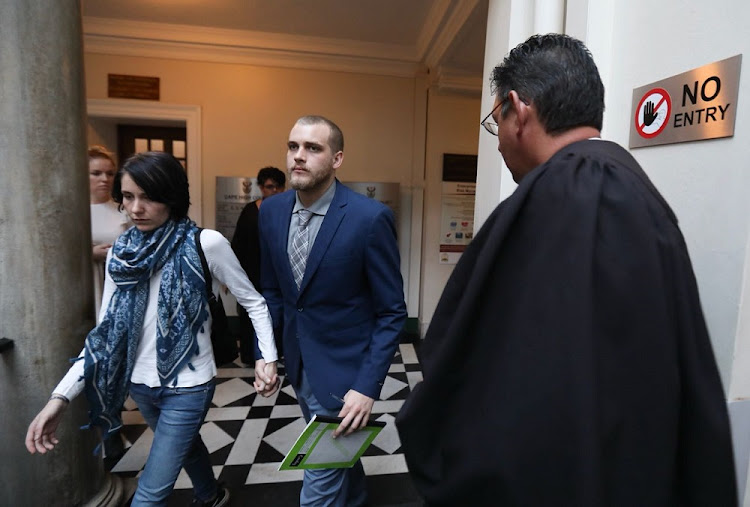 Judge Siraj Desai‚ working through a summary judgment statement in the case of triple murder accused Henri van Breda‚ said "the court is in agreement" with the state prosecutor "that it is highly unlikely the perimeter [of the luxury De Zalze estate] was breached by an intruder."

He said Susan Galloway had stated that the "location‚ security measures and position of the house" made it highly unlikely that an intruder would have gone undetected on the property.

Judge Desai also said that Van Breda's call to emergency services - which lasted from 7:12am to 7:37am on January 27 2015 - showed a "lack of urgency" while the "demeanour of the accused" during "an unduly long conversation" with EMS seems "highly unusual for a traumatised victim" and that at "no point did the responder have to request him to calm down".

He also said that Van Breda "did not make use of other obvious options" in his search for help - for example‚ security numbers on a list on the fridge - and had also only called his girlfriend‚ a "minor residing at a school hostel"‚ shortly after the attacks.

"It is common cause that he did not attempt to alert the security at De Zalze‚" said Desai.

Desai also pointed out that the accused had testified that "he knew it was a very serious situation" and had during the course of the trial said he was under the impression that both his brother Rudi and sister Marli were still alive. But‚ "peculiarly enough"‚ said Desai‚ "he made no mention to [EMS responder] Janine Philander that his brother was still alive".

This had only come out during the court case.

Desai also said that Van Breda‚ under cross examination‚ had said he had called emergency services "again" when in fact no prior call had been made.

"This is simply not a true statement‚" said Desai‚ adding that Van Breda had made no such first call before the alleged loss of consciousness. "He did an internet search at 4:27am and only phoned for the first time at 7:12am‚" he said.

Regarding the blood-flow patterns on Van Breda's chest‚ blood-stain analyst Marius Joubert said the blood-flow patterns occurred with Van Breda's torso erect and not as he lay on the stairs as claimed by the defence. Joubert said‚ instead‚ that the "slight deviation" of the blood was "caused by slight pooling of the blood depending on the contours of the skin" and had not resulted from him being in a lying-down position.

Before the court broke for a short tea break‚ Desai referred to the evidence of Dr James Butler who had said Van Breda's missing two hours and forty minutes from his timeline might have resulted from a postictal state following a seizure as‚ in the last few days of the trial‚ he was diagnosed with juvenile myoclonic epilepsy.

Dark clouds hung over the Cape Town High Court on Monday as a storm waited off the coast to breach the Mother City on Monday. But the weight of the ...
News
4 years ago

The judge said that Dr Butler's diagnosis two and a half years later is a conclusion with "exaggerated influences as it is based on information that is incomplete‚ is not necessarily reliable"‚ and could not be corroborated.

And‚ he added‚ "even if the court accepts that Van Breda had a grand malseizure on the night of the incident‚ it had no bearing on his actions and decisions made before the seizure". He said such a seizure would therefore have had no bearing "on the commission of the murders if he is found to be responsible for the crimes".

He said that‚ "at most"‚ it would "explain his inappropriate behaviour after the murders".

Van Breda's girlfriend Danielle Janse van Rensburg walked behind him as they entered court after a short tea adjournment.

Many court watchers - including legal experts‚ some from the National Prosecuting Authority - feel that Van Breda will in all likelihood be found guilty.

It is possibly the most important day of his life but axe murder accused Henri van Breda struggled to stay awake while judgment was being delivered in the Cape Town High Court.