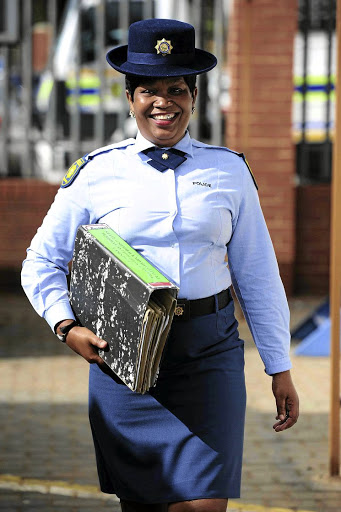 Constable Nompilo Ngwenya used a woman's touch to help fearful victims to open up so that a serial rapist is bust. / THULANI MBELE

Constable Nompilo Ngwenya was so determined to nail a
serial rapist that terrorised women in Tembisa that she took his victims into her own home during her six-month investigation.

The soft-spoken Ngwenya, 35, single-handedly brought Shadrack Chauke, 25, to justice for the rapes of 17 women in four years.

On Tuesday, the South Gauteng High Court sentenced Chauke to 25 life sentences for rape and
attempted murder and 254 years for other charges including robbery and assault.

Ngwenya, who has been an officer for only five years, said this was her first big case and the longest sentence handed down on her record.

"Most of the victims in these cases had left Tembisa for the rural areas, so I had to accommodate them when they came here for the identity parade and consultations.

"Others had young children and I had to feed them. I was so determined to crack this case that I was willing to go the extra mile," she said.

Ngwenya nabbed Chauke on Christmas Eve in 2015 after one of his victims spotted him at Winnie Mandela Park, also in Tembisa.

Ngwenya had been investigating the victims' house breaking and rape cases when she pounced on Chauke.

She spent Christmas Day at the Tembisa police station to help with obtaining Chauke's DNA samples for tests.

On March 2016, the DNA results linked Chauke to 16 other cases where women were attacked, raped and robbed.

Ngwenya had to reopen most of the cases that had been closed because police could not trace the suspect.

Most of the victims had also changed their contact numbers and moved out of
Gauteng. She tracked them all with the help of Home Affairs.

Their locations ranged from Venda in Limpopo to Senekal in the Free State. It took
Ngwenya four months to track down all the victims.

"Some of the victims were married and they had not disclosed their ordeals to their husbands.

"Some felt that the incidents happened a long time ago and they did not want to open old wounds. I worked very hard to convince them otherwise. I promised them that their husbands will never know and I kept my word," she said.

"The brutality and cruelty used in these cases affected me emotionally but I was more determined to solve the case.

"I never dreamt about being a police officer but now there is no place I would rather be."