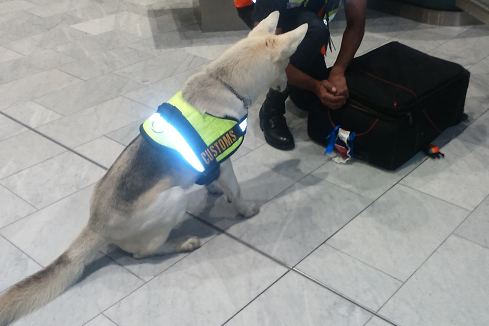 A detector dog alerts his handler that the man’s luggage is suspicious.
Image: SARS

The South African Revenue Service said on Saturday that customs officials were tipped off about the man by colleagues at OR Tambo International in Johannesburg‚ and stopped him as he was about to board the Dubai flight.

“One of the detector dogs reacted positively to the luggage and the bag was opened up and searched. Customs officials then discovered 10 packets of currency hidden among his clothing‚” said a SARS statement.

The packets contained US dollars totalling $156 850 (about R1.92m). “The case – for failure to declare money when departing the country – was handed over to the South African Police Service for further investigation‚” SARS said. Chief customs and excise officer Teboho Mokoena said OR Tambo was normally used to smuggle currency out of the country‚ but recently other ports had become more popular.

“This is why it is important that all of our units work closely together to prevent this from happening. I would like to commend the co-operation amongst the different divisions within customs which led to this successful bust‚” he said.

Drugs valued at over R30m seized at OR Tambo airport

A sting operation at the port of Durban by SARS customs officials and the Hawks has led to the seizure of 1.6 tons of illegally harvested frozen ...
News
4 years ago
Next Article