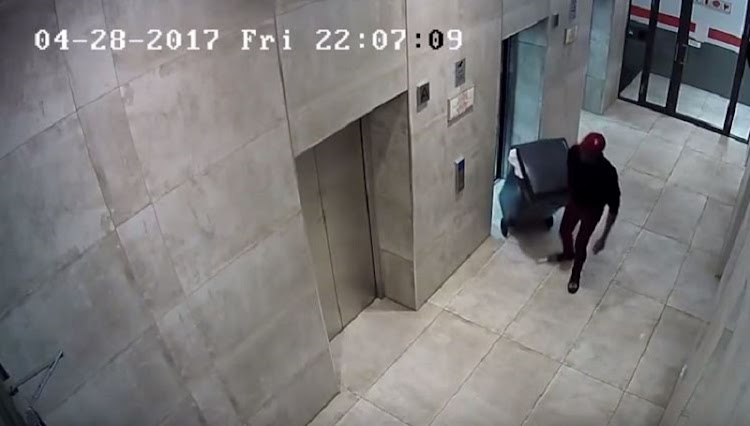 Sandile Mantsoe is clearly struggling as he’s filmed coming from his flat‚ dragging a large bin.

It’s 10.06pm on Friday April 28 and inside the bin is the body of Mantsoe’s murdered girlfriend‚ Karabo Mokoena.

This chilling CCTV footage‚ admitted into evidence during Mantsoe’s trial but not previously publicly released‚ shows how the young man retrieves a wheelie bin from a room near his flat at 9.57pm. Less than 10 minutes later he’s captured pulling the clearly heavy bin into a lift.

The last time Mokoena was seen alive was at 2.48am that day.

Cops tell how they put Sandile Mantsoe case together

The three investigators behind the successful murder conviction of Sandile Mantsoe had to crisscross three provinces.
News
4 years ago

She had been repeatedly abused and assaulted by Mantsoe‚ and was desperate to start a new life without him. But she never got the chance.

Mokoena was brutally murdered by Mantsoe‚ who was adamant that she had killed herself at some point in the 12 hours that followed her stepping into a lift with him. He admitted that he disposed of her body by burning it with pool acid‚ petrol and a tyre‚ claiming he had done so because he feared being blamed for her death.

In the footage he appears almost nonchalant as he removes the young woman’s body from his flat before taking it to a field in Lyndhurst‚ where he tried to destroy it. He carefully returns the bin he used to move her body before driving out of his block of flats‚ Mokoena’s body in the boot of his Mercedes-Benz.

Mantsoe returns to the flat early the following morning‚ and is seen wearing blue rubber gloves and carrying a green plastic bag into the room containing the wheelie bin.

The footage comes as the lead investigator in the Mokoena case said he was convinced the young woman was murdered as part of a ritual killing.

He revealed that “60%” of her internal organs‚ including her heart‚ were missing when her burnt body was discovered.

“When the body was found‚ the body of Karabo‚ there were about 60% body parts missing. From my experience‚ such things … you find in cases that are cult- or maybe ritual-related matters‚” Captain Malefetsane Phillip Radebe said.

Karabo Mokoena case is still convinced that the young woman was murdered as part of a ritual killing.
News
4 years ago

Sandile Mantsoe was found guilty on Wednesday of murdering his girlfriend Karabo Mokoena.
News
4 years ago

"I didn't kill her‚" convicted murderer Sandile Mantsoe said of his girlfriend‚ Karabo Mokoena‚ on Wednesday.
News
4 years ago

The mother of Sandile Mokoena’s two-year-old daughter on Thursday took to the stand in the Johannesburg High Court.
News
4 years ago
Next Article