Water-wise whiz-kid jets off to the US 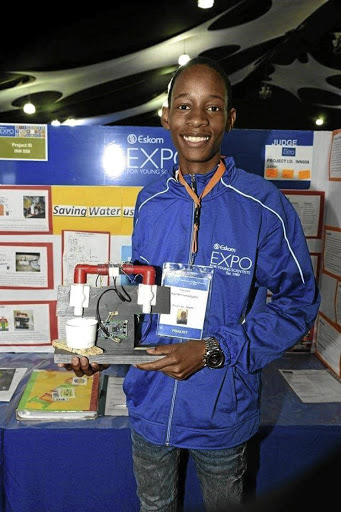 A 17-year-old boy has created a smart pipe that can detect wasted clean water that passes through drainage systems.

Kau Mohlamonyane's invention first featured at the Eskom Science Expo last year, and has earned him an invitation to be assessed by leading scientists and engineers in the US.

He will showcase his invention from May 13 to 18 at the Intel International Science and Engineering Fair (Intel ISEF) in Pittsburgh, Pennsylvania, where up to $4-million (about R50.3-million) in prizes will be up for grabs.

"I'm really excited about it. It's the first time I will be travelling by airplane and if they like my invention I'll represent South Africa in the biggest science fair in the world," he said.

Mohlamonyane, from Groblersdal in Limpopo, said his fourth and final prototype took two months to create. It has two exit pipes and one input pipe which uses the basic fundamentals of electronics to detect if water is clean or dirty.

"The final prototype enables the device to be able to store the reusable water being wasted."

Otshepeng Babeile is raising the bar among her peers when it comes to mathematics and natural science subjects.
News
3 years ago

Mohlamonyane conducted a case study to see how much water could be saved for a family of five. He found that his smart pipe could save up to 16% of water used in households.

"The inspiration for this device came about when I was washing dishes. I realised that when we want cool water from the tap, we let the hot water run until it cools. This is a waste of clean water," he said.

The Grade 11 Hoërskool Ben Viljoen pupil said his dreams are to have smart pipes in households all over the world and he plans to work in the electrical engineering field.

His mother Nkata Mohlamonyane said: "I am thankful to God who has given him his talents. It has been his dream to travel the world."

Eskom Science Expo academic director Krishnie Naidoo will be accompanying Mohlamonyane and seven other participants. "He's worked very hard. He went through rigorous interviews to be selected for the expo in America."

A young man always yearned to tell his story by writing poems, movies and drama scripts.
Good Life
3 years ago
Next Article