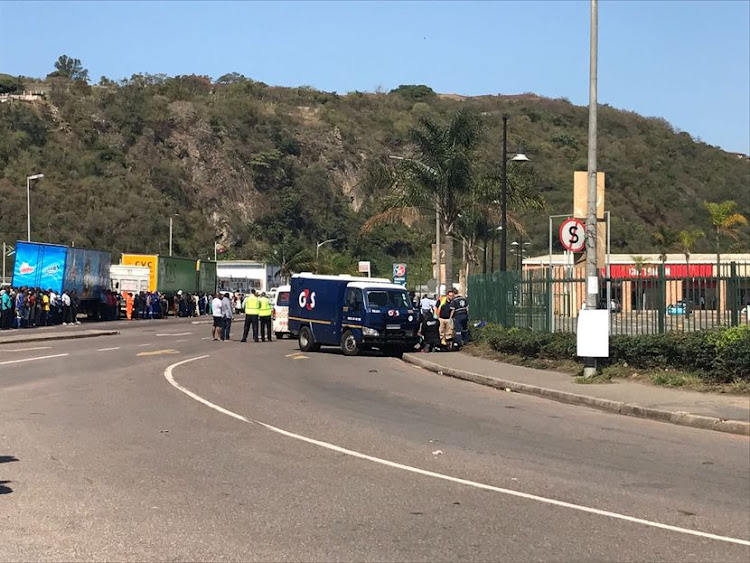 A generic image of a cash-in-transit robbery.
Image: Jeff Wicks

Thirteen surviving members of a cash-in-transit gang have been jailed for life after they were cornered and arrested after a shootout with police in the Free State.

Four of the armed robbers were killed after they attacked a G4S Security vehicle near Welkom in August 2014.

Aged between 39 and 32‚ the 13 were all found guilty of murder‚ attempted murder‚ robbery with aggravated circumstances‚ theft and possession of unlicensed firearms and handed life sentences by the Kroonstad High Court on Thursday.

“The armed robbers attacked a G4S Security vehicle and the Hawks Tactical Operations Management Section (TOMS) who had information about the planned robbery with the assistance of the SAPS Task Force members engaged the heavily armed group in a shootout‚” said Hawks spokesman Brigadier Hangwani Mulaudzi.

“During the exchange four of the robbers were fatally wounded. The teams managed to arrest thirteen (13) suspects on the scene‚ a large number of firearms and stolen vehicles were seized.”

The acting national head of the Hawks‚ Lieutenant General Yolisa Matakata‚ said: “Our investigations and collaborative efforts with other law enforcement agencies have yielded good results despite the fact the case took long to be finalised.”

But‚ she added‚ there had been an upsurge of cash-in-transit robberies in the country by “dangerous groups that are bringing fear to our communities and attacking the cash services sector.

“Our combined efforts are yielding good results where we have seen successful arrests and prosecution and of some the brazen criminals.”

Nine people were sentenced to a combined 212 years imprisonment in February for a 2009 cash heist at Masizakle Community Hall in Addo.

Thirteen robbers were sentenced to a collective 479 years on a number of charges for a 2014 Witbank SBV depot robbery.