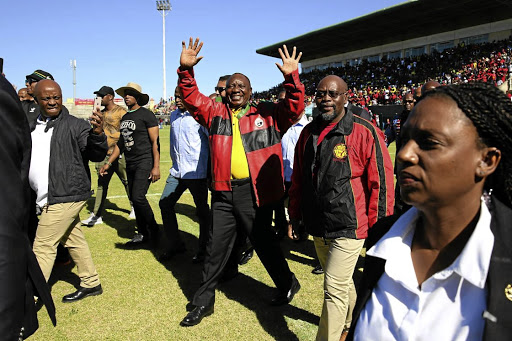 Dlamini noted the walkout, saying those who were leaving could do so as many of the points he would make had already been expressed by other leaders who took to the podium before him.

His relationship with Zuma has earned him the ire of Cosatu members who were at the forefront of the campaign to push Zuma out of office.

Meanwhile, Ramaphosa described this year's Workers' Day as the "best ever".

He stressed that the national minimum wage was a victory for workers, despite what its detractors believed.

"This is a victory for the workers of our country, no matter what other people may say. It's also a victory for Cosatu which was the first to raise this issue," he said.

The South African Federation of Trade Unions (Saftu) has been critical of Cosatu's approval of the R20-an-hour minimum wage, calling for a R12 500 monthly rate.

Cosatu was one of three federations that took part in the negotiations that led to the adoption of the draft policy.

"Let's not react opportunistically on the national minimum wage. We can't, therefore, say it is going to benefit six million workers and say it's all or nothing," Nzimande said. In the same breath, he called for unity in the labour movement, saying the country needed "broad working class unity".

"Unless workers take responsibility for their country, we are going to be in a big problem," he said.

There was also a call for Cosatu to reconsider its stance on the National Union of Metalworkers of SA (Numsa) and Saftu. The party's Eastern Cape chairman Oscar Mabuyane and ANC national organiser Senzo Mchunu said the expulsion of Numsa was harming the party and the labour movement at large. They were speaking on the sidelines of Cosatu's main Workers' Day rally in Port Elizabeth.

Mabuyane said the party should engage Cosatu on devising ways of bringing Numsa back into the fold.

Numsa was expelled from Cosatu in 2014 following the union's decision not to back the ANC during electioneering as it felt the party was not committed to delivering on workers' demands. At the time, Numsa was the biggest Cosatu affiliate.

Mchunu said the ANC would "love to have one federation" fighting for workers.