Workers affiliated to the South African Federation of Trade Unions (Saftu) brought Johannesburg's main streets to a halt yesterday as they demanded a higher minimum wage.

The City of Gold was filled with marchers clad in red T-shirts, some holding placards mocking President Cyril Ramaphosa.

"If they don't want to listen to us today comrades, we are coming back for two days. We are going to take the buses, trains, taxis. We will not leave the town until they announce our rights are guaranteed.

"We need a radical response because they are taking our rights radically. We are going to have to respond radically for two days," said Saftu general secretary Zwelinzima Vavi, who led the march.

SA Federation of Trade Unions (Saftu) general secretary Zwelinzima Vavi said on Wednesday that it was a mistake for workers to have voted for a ...
News
4 years ago

Saftu, which was formed just over a year ago, is against the R20-an-hour rate and is rejecting the R3 500 minimum wage. It is demanding R12 500 a month as a minimum wage.

Saftu and its affiliates, including the National Union of Mineworkers of SA (Numsa), delivered a 17-page memorandum of demands at Gauteng premier David Makhura's
office and the Chamber of Mines, then proceeded to the departments of health, human settlements, and labour.

Saftu vowed to demonstrate at various government departments until the national minimum wage was increased.

It claims that the minimum wage will tie workers to the apartheid wage system and cripple their ability to strike. 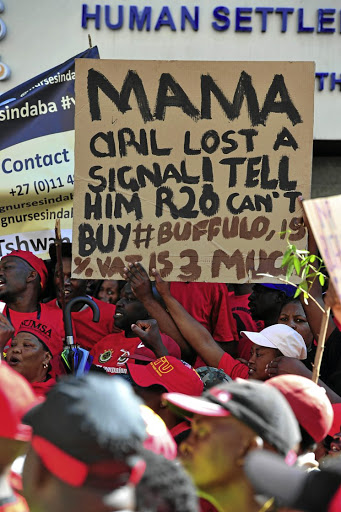 The government is currently considering the National Minimum Wage Bill, the Labour Relations Bill and the Basic Conditions of Employment Bill, which are expected to introduce the national minimum wage.

Supporters of the minimum wage such as the Federation of Unions of South Africa
(Fedusa) and the Congress of South African Trade Unions (Cosatu) and its affiliatesstayed away from the march.

Numsa said it had joined Saftu's strike as it was also opposed to the proposed labour law amendments.

Cosatu spokesman Sizwe Pamla said the union was in favour of the national minimum wage and had "no reason to strike over something that will benefit the workers".

Pamla said the minimum wage would be a huge achievement that would see wages rise for about six million workers, who he said presently earned less than R20 an hour.

Fedusa's general secretary Dennis George said they were not part of the strike because they were happy with the current agreement following their negotiations with all affected parties two years ago.

"I think our colleagues are being disingenuous to say they want R12500 a month. How many people are going to lose their jobs because of this irresponsible approach?" he asked.

The South African Federation of Trade Unions hit the streets as part of a nationwide strike on Wednesday April 25 2018 in an effort to raise concerns over a proposed R20 per hour minimum wage.