DA admits life will be tough with Zuma gone 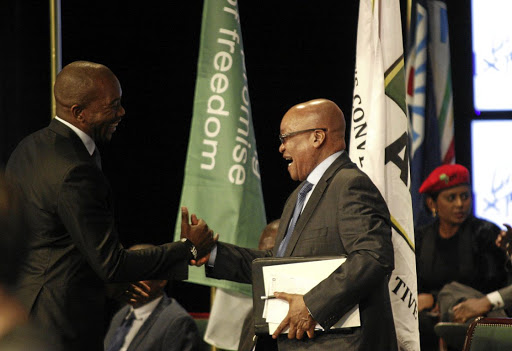 DA leader Mmusi Maimane and former president Jacob Zuma in a rare moment of rapprochement during the signing the IEC Code of Conduct at Gallagher Estate in Midrand.
Image: VATHISWA RUSELO

The DA has conceded that with former president Jacob Zuma gone it needs to change its strategy on how to fight the ANC-led government.

Although it pushed for Zuma to be recalled, the DA has come to realise that he had worked in its favour for tarnishing the image of the ANC.

This was discussed at a workshop attended by the DA's national election team in Cape Town this week.

"Zuma was an easy target. We have realised the general elections next year are going to be tough because there is a different competitor [President Cyril Ramaphosa]," said a DA leader who asked not to be named for fear of reprisal.

He said there was now a push to adjust the election campaign strategy.

"We want to embark on a positive campaign and tell a good story about where we govern. We want to allow our track record to speak for itself. Our election campaign message is going to be policy-focused," the leader said.

DA national leaders including party leader Mmusi Maimane were due to be briefed on the election strategy plan today.

The party's Federal Executive Council, its decision-making body, will meet within two weeks to engage on the plan.

Yesterday Maimane said jobs and the provision of services for people would form part of the party's election strategy plan.

"This election in 2019 is about jobs and poor people who have been excluded. It is not about Zuma," Maimane said.

DA member of the Gauteng legislature Khume Ramulifho warned that the party would become irrelevant if it did not advance real issues.

"People want issues that talk to them. Community issues should be given priority. We need to look at what we are going to do for the people," he said.

He said to win the hearts and minds of the people the DA needed to look at its successes where it governed.

"We need to make comparisons about what the DA has managed to achieve in a short space of time compared to what the ANC has done in the past 24 years," he said.

"The dominant issue [in the DA] was about one person [Jacob Zuma] who was seen to be corrupt. Other issues were seen as minor."