Image: PENWELL DLAMINI Saftu strike Protesters gather at Newton, downtown Johannesburg ahead of the march against the national minimum wage and the proposed changes in the labour laws.

Reports of intimidation in and around Elandsfontein in Ekurhuleni have surfaced ahead of South African of Federation Trade Unions National shutdown march.

Samual Mkhondo was turned away by a group wearing National Union of Mineworkers of South Africa (Saftu) T-shirt’s this morning while on his way to work.

A seemingly shaken Mkhondo said he was on his to work at a local factory in Elandsfontein when he was stopped by a group of about 20 protesters who ordered him to turn around and not go to work.

“I fully support what they are protesting for, but we should not be intimidated in the process because even though the money we get is little, it feeds our families,” Mkhondo said.

Police were seen patrolling the streets ahead of today’s march.

Small groups of marchers with carrying sticks and rocks were seen this morning as they made their way to the Elandsfontein train station where they will gather and depart to join thousands of the Saftu affiliates at the Johannesburg leg of the march.

Numsa Local Secretary Thipitle Matemane denied reports of intimidation saying they were simply mobilising members to join them in the march.

“Our members have been well behaved and are marching from various points in the city so we can make our way to Johannesburg,” Matemane said.

He said the union is calling for government to implement R20 an hour minimum wage, saying anything less was an insult to all workers.

“That is not a living wage, it’s a slave wage and people can’t live on that sort of money and take care of their families. The government is trying to entrench a culture of poverty which our forefathers fought hard to dismantle,” he said. 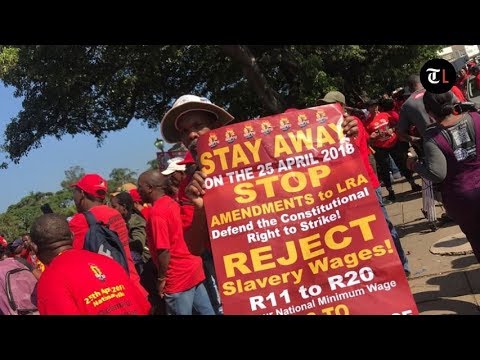