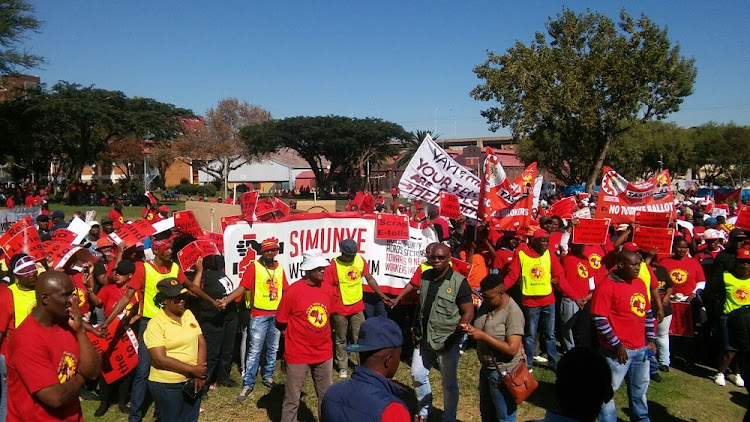 Protesters begin to gather in Newton, downtown Johannesburg ahead of the march against the national minimum wage and the proposed changes in the labour laws.
Image: Penwell Dlamini

President Cyril Ramaphosa received the most attention in the South African Federation of Trade Unions (Saftu) protest in Johannesburg on Wednesday morning.

One of the posters showed Ramaphosa with buffalo horns‚ with the text "Cyril Buffalo is R20 p/h" and was lifted high for everyone to see. Next to the big poster was another one depicting Ramaphosa dripping blood from his mouth‚ with the words "bloody agent".

Reports of intimidation in and around Elandsfonteinhave surfaced ahead of Saftu's national shutdown march.
News
3 years ago

While these posters were held high‚ a traditional poet shouted "take the R20 and shove it under the tail of a buffalo".

The workers began arriving at about 10am from various parts of the province. They are marching against the national minimum wage and proposed changes in the labour laws of the country.

Trains from different parts of Gauteng have been organised to bring people for free to Johannesburg's inner city.

People gathered in Newtown ahead of their march to the Department of Labour‚ the premier's office and the Gauteng department of social development.