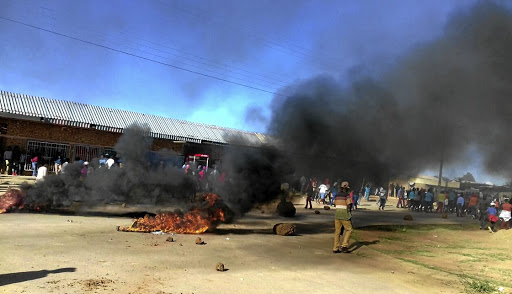 Businesses closed shop in Delareyville after residents took to the streets to revive their call for the removal of North West premier.
Image: Supplied

North West was yesterday hit by fresh protests as members of the community revived a call for the removal of premier Supra Mahumapelo.

Business activity in Delareyville near Mahikeng came to a standstill after protesters took to the streets.

They tried to burn the house belonging to Tswaing mayor Dimakatso Malwane in Atamelang, the hometown of Mahumapelo. At the centre of grievances are claims that Malwane was protecting Mahumapelo. They also accused her of donating wild animals belonging to the municipality to her friends.

A community leader Ntesang Theletsane said service delivery has collapsed in the area. "The premier must go," said Theletsane. "We don't have water but a contractor was appointed to erect boreholes."

According to Theletsane, Malwane said the wild animals have been donated to people linked to politicians in Rustenburg. "The mayor is corrupt. Wild animals have disappeared in the municipality."

Mahumapelo is under pressure to step down after allegations of corruption were levelled against him.

ANC secretary-general Ace Magashule said discussions in the party on the developments in North West were ongoing.

"There [are] organisational and governmental issues," Magashule said.

"We have mandated the president to deal with some government issues and the ANC is continuing to deal with organisational challenges and issues."

Meanwhile, Mahumapelo appeared in public for the first time in Coligny yesterday where he said if the ANC decided that a leader must step down from a position, they should subject themselves to that.

It has also emerged that Mahumapelo detractors in the ANC were now pushing for the disbandment of the provincial executive committee.

They say this would ensure that Mahumapelo's power and influence in the province is neutralised. Mahumapelo's term as the provincial chairman of the ruling party ends in February. The ANC Veterans League is among those who are gunning for the premier.

The DA yesterday called on President Cyril Ramaphosa to act in the interest of all communities and remove Mahumapelo from office. "The fact that Mahumapelo remains in office signals that Ramaphosa's cancellation of business in the UK was nothing more that a PR stunt," DA provincial leader Joe McGluwa said.