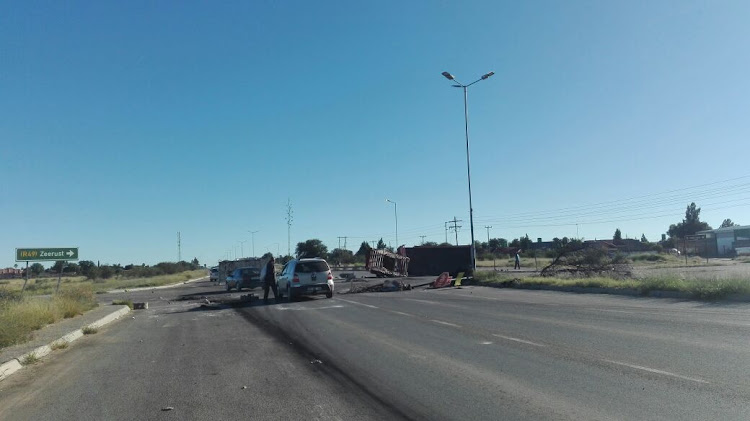 Leaders of the community protest in the North West capital of Mahikeng have suspended protests on Friday‚ pending an intervention by President Cyril Ramaphosa.

The group‚ known as the Revolutionary Council‚ has called for a halt in protests following a night of violent revolt that has led to the burning down of buildings and vehicles. More shops were looted too.

The presidency announced on Thursday evening that Ramaphosa had cut short his trip to the United Kingdom to deal with the anti-Mahumapelo protests. Ramaphosa is expected to meet with ANC structures‚ its alliance and the caucus.

Magogodi said they were expecting Ramaphosa to sack Mahumapelo so that calm could be restored.

A cultural centre in Mahikeng has burned down amid violent protests targeting Premier Supra Mahumapelo.
News
4 years ago

"We want calm to return. We want this to end. We are hoping Ramaphosa comes with a solution‚" Magogodi said.

He said the Revolutionary Council condemned acts of violence and the destruction of private property but believed the protest was necessary.

Overnight‚ police tried in earnest to quell fires after protesters set alight the government-owned Mmabana cultural centre as well as vehicles and buses. The fire blazed on as employees and artists watched in dismay.

The protests started as a demand for service delivery and has led to the demand for Mahumapelo's removal. The town remained shut on Friday morning as the community reeled at the overnight violence and shop owners remained uncertain about whether to open their businesses.

There was renewed looting overnight in the central business district as police shot rubber bullets to repel looters. There was a heavy police presence across the town while VIP security was seen preparing for Ramaphosa's arrival.

Ramaphosa cut short his UK visit to attend to the unrest in the North West. pic.twitter.com/jTTvcS4cra

A hardware and a liquor store were looted in Stateng, Mahikeng, on April 20 2018 during protests calling for North West Premier Supra Mahumapelo to step down. Subscribe to TimesLIVE here: https://www.youtube.com/user/TimesLive