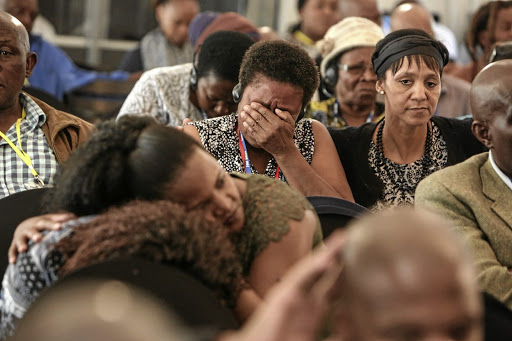 Families of the deceased and survivors of Life Esidimeni tragedy are coming forward to claim for the R1.2-million payout promised to them.
Image: Alaister Russell

More Life Esidimeni claimants have come forward following the conclusion of the arbitration hearing into the deaths of 144 psychiatric patients in Gauteng.

The arbitration process was finalised about a month ago with former deputy chief justice Dikgang Moseneke declaring a R1.2-million award for the families of the deceased and survivors.

Moseneke also made provision for families who did not participate in the arbitration process but met the criteria of beneficiaries to also receive the award.

Yesterday, member of the family committee Christine Nxumalo said a lot of families continued to come forward and were referred to the premier David Makhura's office for verification.

Nxumalo said she had referred 16 families who could possibly qualify to receive compensation while nine came forward last week. She said a further 20 people had contacted her prior to that.

She said the majority of the people making enquiries were relatives of survivors.

"Most of the families thought because their relatives had survived they did not qualify to form part of the process," she said.

Nxumalo said families would have to go through a stringent verification process to determine whether they were among the 1700 patients removed from Life Esidimeni facilities to various NGOs.

"I'm getting calls from families on a daily basis," he said.

He estimated that he had referred between 15 and 20 people to the premier's office.

A total of 144 deaths of Life Esidimeni patients are being investigated with NPA "currently in the process of formulating charges".
News
3 years ago

Spokesman at the premier's office Thabo Masebe said they could not yet confirm how many people had come forward so far. He said such information would be available once all claimants had been verified.

Masebe said a plan was in place to ensure that those who qualified but did not participate in the hearing can be accommodated. This included making a budget available to pay out claims.

DA spokesman for health Jack Bloom also said he had received calls from the relatives of patients who wanted to find out if they fall under the Life Esidimeni claim.

Most of the calls came from the families of survivors.

"This is a potentially large bill indeed," Bloom said.