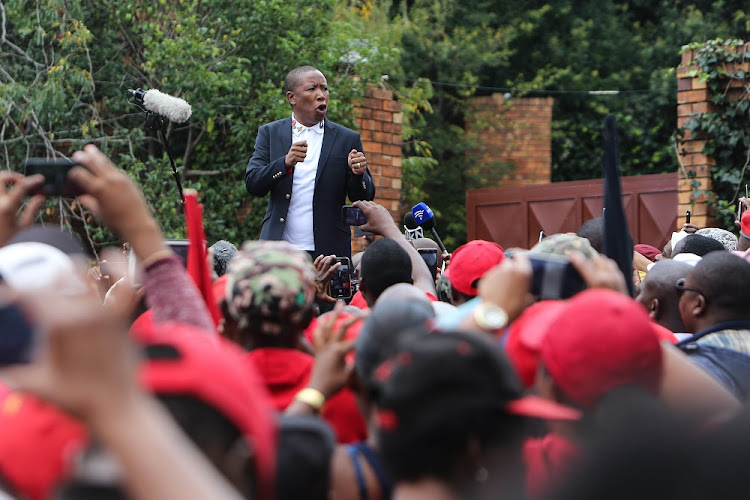 The Economic Freedom Fighters (EFF) has described the private prosecution of Julius Malema as a bid by AfriForum to divert attention from the issue of land expropriation without compensation.

Malema reacted to the news with a fiery tweet: "Bring it on bloody racists‚ you don't scare me at all. I’m born ready! No white man will decide my destiny‚ the poor masses of our people will..."

The EFF said afterwards in a statement that the prosecution was a “nonsensical attempt of the ultra-right wing” that had less to do about the rule of law than deflecting attention from the thorny issue of land.

“It is not a secret that the EFF is at the forefront of the struggle for land expropriation without compensation and that AfriForum is one of its right-wing opponents‚” a statement by acting spokesperson Tebogo Mokwele read.

“Instead of engaging in a democratic debate and engagement on the land question‚ AfriForum does what their colonial and apartheid forefathers did to Freedom Fighters‚ which is criminal persecution and prosecutions for political reasons.”

The EFF said the original case was struck off the roll because the NPA “couldn’t present a solid case” and that the party stood behind Malema. The party believed that the private prosecution would simply multiply support for land expropriation without compensation.

The challenge has been set down for May 10-11‚ the organisation's Kallie Kriel said.
News
4 years ago

"Nobody is above the law. Even if Mr Malema thinks he is above the law‚ he is not. We will make sure that he is held accountable‚" said AfriForum CEO Kallie Kriel on Thursday.

AfriForum‚ asked why they were targeting figures like Julius Malema and Duduzane Zuma for prosecution‚ said on Thursday: “If the NPA doesn't do their job‚ then we have to intervene in these matters."