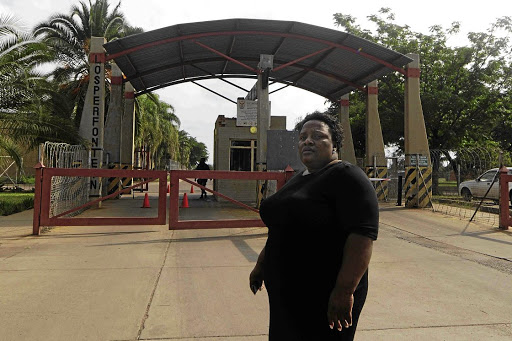 Sheila Mopai outside the Losperfontein Prison where she accuses a female officer of putting her hand up her private parts during a search when she visited a relative. /Thulani Mbele

A mother was stripped naked and had a finger stuck in her private parts during a search on a visit to a prison.

While the prison commissioner in the area denied the strip search of Sheila Mopai, 42, of Letlhabile in Brits, North West, he justified the policy, saying warders had previously caught visitors smuggling dagga and cellphones hidden in the genitals.

Mopai, who gave Sowetan permission to name her,
yesterday spoke of her humiliation and trauma at the hands of prison warders.

She had visited her brother at Losperfontein Correctional Centre in Brits on Sunday when she was allegedly ordered to take off her panties before a female warder stuck fingers into her vagina.

"She [the warder] took me into a room and started searching my body. She touched my genitals and told me to take off the panty," Mopai said.

"I was freaked out, I screamed and asked her why she wanted to touch my private part. I told her I was not comfortable and that what she was doing did not sound right."

She said the warder told her that her rights did not matter at the centre because it had many cases of women who smuggled things to prisoners.

"I refused and we argued until her senior came to check on what was happening.

"I explained that the warder wanted to search my genitals. She [the senior] looked at me and said it was a normal procedure and that if I want to see my brother I needed to be searched."

"She put on purple rubber gloves and came towards me. I looked at her and begged her not to do that."

Mopai said the warder put her finger into her nonetheless.

Mopai's story was confirmed by 64-year-old Johana Sefala who was also strip searched minutes before her.

"I heard them shouting, she [Mopai] was screaming telling the warder to stop touching her private parts."

"She told me that it was just a search, she placed her four fingers inside my panty but did not put her finger in, she was just checking if I did not have something down there," Sefala, who had come to visit her last-born child, said.

Correctional Services area commissioner for North West and Limpopo, Kenneth Mthombeni, said "we are not apologetic in searching visitors or anybody who enters".

"But in doing so we have to maintain human dignity.

"In instances where they take off your panties and put a finger, that has got to be a very exceptional case."

He said the centre manager denied Mopai's claim that she was finger searched.

"We can't tolerate inhumane [behaviour] but in the same vein I can tell you that we do not have time for people who want to come and further criminal activities," he said.

"We have got a duty to protect the community; in doing so we must not undermine anybody, including this person," Mthombeni said.

He said if his official would apologise, saying they did it, he would also apologise. He said they previously found both men and women hiding stuff in their private parts.

Mthombeni told Sowetan he had pictures of visitors who were caught hiding cellphones and dagga in their privates.

Regional communication manager Tshidi Mapole also said the department has an obligation to search anyone at any time who enters correctional facilities, including visitors and correctional officials.

"Anyone who does not want to be searched is free not to come to our premises. Our officials are, however, expected to conduct these searches in a dignified manner," Mapole said, adding the department would investigate Mopai's incident with immediate effect.

Meanwhile, police spokesman Mpeile Talani said they have opened a rape case. "A 42-year-old woman came to open a case with us after she had allegedly been penetrated in her genital parts by one of the employees at Losperfontein prison," Talani said.

He said that in terms of the criminal law, any penetration without consent of the affected person amounts to rape.