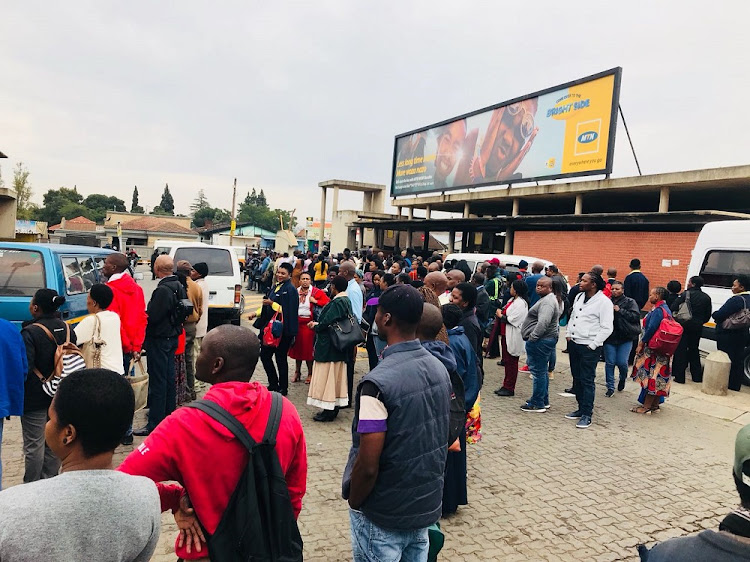 Dozens of commuters at Baragwanath Taxi Rank have been left seeking alternative transport after a bus drivers embarked on a nationwide protest over wages.
Image: Tankiso Makhetha

Thousands of commuters have been left stranded this morning after the South African bus operations went on strike over wages.

Commuters who opted to use taxis as an alternative were left frustrated by long queues they found at Soweto taxi ranks.

Bokang Matlala, a first year student at the University of Johannesburg from Soweto said that despite the warning they’d received from the Megabus inter campus bus service, they could not afford to make alternative plans to get to the Doornfontein Campus.

Think again if you want to take the bus on Wednesday‚ or you could find yourself stranded.
News
4 years ago

“I had to borrow money from other students because I have a presentation at 9am. I just have enough money to get to campus because I need the marks to pass my second semester,” Matlala said.

Sally Makhubu, a bus commuter of 10 years who did not know where to catch taxis to Randburg from Baragwanath Taxi Rank spoke of the inconvenience she’s experienced this morning.

“I haven’t taken a taxi to Strydom Park in years. The bus I take usually take drops me off right at the gate where I work. Now I have to walk from Malibongwe Drive to Strydom Park when I get to Randburg. These employers must just give the drivers what they are demanding so things can be normal again,” Makhubu said.

Long queues could be seen at the various taxi ranks Sowetan visited this morning.

Siphamandla Dladla, a taxi operator in Dobsonville, said the added passengers were good for business even though the anticipated more people to flock to taxi ranks.

“People were warned on Monday that buses won’t be operating from Wednesday and they made alternative plans. The queues are not as long as we thought they would be but there are more passengers than normal,” Dladla said.

Satawu said as many as 17 000 workers were expected to join the strike.

The workers are demanding a 12 percent wage increase across the board while employers are offering only seven percent. The union said it was demanding a living wage and decent working conditions so that workers can deliver quality bus transportation services.