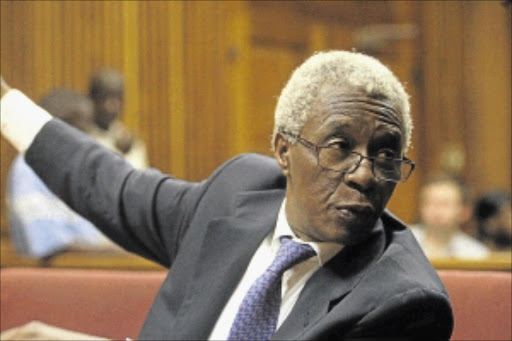 Over a decade after a drunk judge‚ Nkola Motata‚ was recorded swearing at onlookers after he crashed his Jaguar into a wall‚ a Judicial Service Commission tribunal has found that his racist comments – and the dishonest way he conducted his trial – could justify his removal as a judge.

The tribunal said it believed that Motata retaining his status as a judicial officer would negatively affect public confidence in the justice system. It has recommended that the Judicial Service Commission consider impeaching Motata‚ a move that would see him losing all the benefits he enjoys as a judicial officer.

Despite his conviction for drunk driving‚ the judge had told the tribunal he did not consider himself drunk at the time of the January 2007 crash because “I had only had two glasses of wine and that’s below the limit”.

But the tribunal stated in its findings on the case that it was evident that Motata was indeed drunk.

Vicki Momberg's prosecutor says her bid to appeal her conviction and sentence is "fatally defective" and should be dismissed.
News
4 years ago

Motata had also defended his use of the word “boer” to refer to Richard Baird‚ a key state witness who captured the cell phone footage and recordings of Motata angrily admonishing him and two female Metro police officers. He argued that the term “boer” was neutral‚ and was not racist because it was said in Setswana.

But the tribunal didn’t buy that argument‚ and found that Motata was indeed guilty of using racist language that could “impinge on….the impartiality and dignity of the courts”. The tribunal that investigated whether Motata was guilty of gross misconduct only began its work in January this year – after the Judicial Service Commission resolved that the complaints against him warranted such a probe.

This was after the Johannesburg Magistrate’s Court ruled‚ during Motata’s drunk driving trial‚ that he had indeed uttered the words “no boer is going to undermine me…this used to be a white man’s land‚ even though they have more land…South Africa belongs to us. We are ruling South Africa”.

He also swore at Baird.

The tribunal also investigated whether the way in which Judge Motata conducted his defence in his drunk driving trial was dishonest‚ and unethical. It found that he had acted with a lack of integrity that was unbecoming of a judicial officer‚ by attacking Baird as a racist liar‚ and continuing to dishonestly maintain that he was not drunk at the time of the accident.

Afriforum and the Catholic Commission for Justice and Peace had complained to the JSC about the racial comments that the judge had made during the drunk driving incident – while advocate GC Pretorius argued that the way the judge conducted his defence during his trial was “inconsistent with the ethics of a judicial officer”.