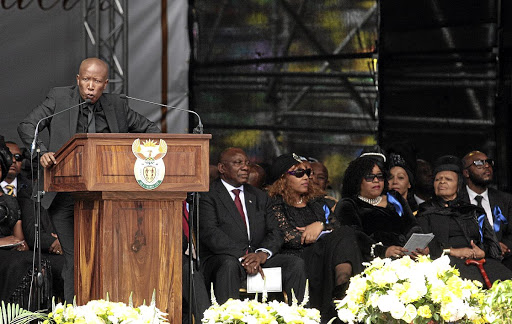 Julius Malema had called for airport to be named after Winnie Madikizela-Mandela.
Image: Veli Nhlapo

The Airports Company of South Africa (Acsa) confirmed this to Sowetan yesterday following a call by EFF leader Julius Malema on Saturday to rename the airport after the late Struggle icon, Winnie Madikizela-Mandela.

Acsa spokeswoman Deidre Davids told Sowetan yesterday the renaming of the airport had already been initiated after Transport Minister Blade Nzimande on March 22 ordered the process to name the airport after Mandela to begin.

Davids said Acsa will follow due process on the matter. "Key to this will be following all statutory requirements and a series of stakeholder engagements, including a public participation process," she said.

Malema used the funeral of Madikizela-Mandela at Orlando Stadium on Saturday to call for the government to rename the airport in her honour.

"If it is true that the ANC want to honour you, let them name Cape Town Airport after Winnie Madikizela-Mandela," he said. His call was supported by many on social media who had even begun an online petition to support the renaming in honour of Madikizela-Mandela.

Department of Transport spokesman Ishmael Mnisi said they had received proposals for the renaming of the airport.

He said the names that were being canvassed included that of Mandela, Madikizela-Mandela and Robert Sobukwe.

"While the Department of Transport, with the Department of Arts and Culture, are still in a consultation process, Minister Blade Nzimande believes that it is important that such an important airport of national, regional and international significance should be named after one of our liberation icons," Mnisi said.

The late struggle icon Winnie Madikizela-Mandela's daughter Zenani did not mince her words as she spoke during her mother's funeral's service at ...
News
4 years ago

He said the process was expected to be concluded within the next few months.

At the funeral, Zenani Mandela-Dlamini, said she and her sister could not chose between the legacy of their father and mother.

"My sister and I are doubly lucky in that we got to call Winnie Nomzamo Madikizela-Mandela our mother and Nelson Rolihlahla Mandela our father," she said.

Economic Freedom Fighters leader Julius Malema spoke at Winnie Madikizela-Mandela’s funeral on April 14 2018 after a special request from her family.