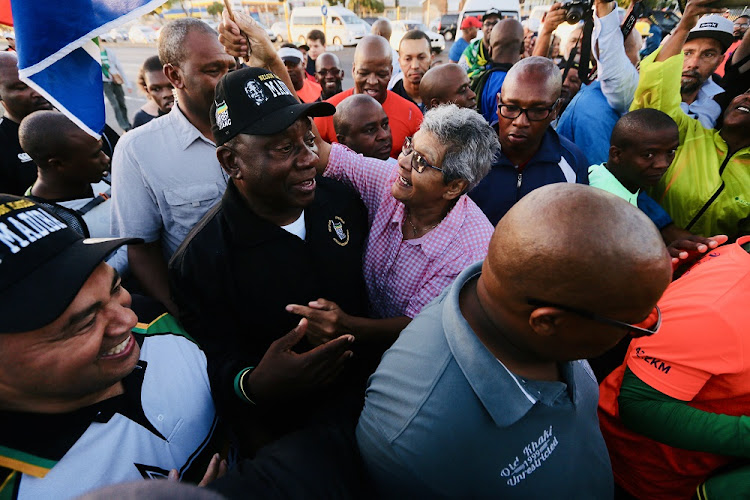 President Cyril Ramaphosa gets a warm welcome in Athlone where led members of the public on a morning walk from Gugulethu.
Image: ESA ALEXANDER

From 5km power walks to 12km fun walks‚ President Cyril Ramaphosa is on a mission to recruit others to join him in fitness.

A statement from the presidency on Thursday said Ramaphosa was planning to participate in the annual 12km Gandhi Walk in Lenasia‚ south of Johannesburg‚ on Sunday.

"The walk is organised annually as a fundraiser by the Gandhi Walk Committee (GWC) to create a fun social platform for nation building‚ good health and promote community awareness‚" the presidency said.

"The central theme for Gandhi Walk 2018 is “Going Green” aimed to champion social change and promote community awareness to change attitudes and behaviours towards climate change and greener living."

The walk starts at the Gandhi Hall at 9am.

In his two months in office‚ Ramaphosa has shown himself to be a fitness freak.

Just days after assuming his role and while handling serious matters such as the state of the nation address or the looming budget speech‚ Ramaphosa remained consistent in his morning walks along Cape Town's Sea Point promenade.

Some also started hitting the trail‚ hoping to snap pictures with him.

In Gugulethu about 100 people joined him on his morning walk from the Sports Centre to the Athlone Stadium.

He said he was on a mission to "get South Africa fit" this year and led by example‚ barely breaking a sweat.