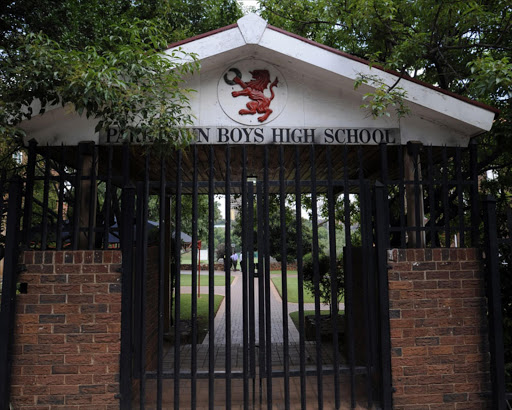 New allegations and evidence have emerged of incidents at Parktown Boys High School in Johannesburg.

Gauteng Education MEC Panyaza Lesufi held up a thick report on Thursday evening when he addressed parents at the school after meeting school management‚ the school governing body and complainants on Thursday afternoon.

Lesufi did not say what the new allegations and evidence were about. He added that no names will be mentioned.

The media was asked to leave the meeting when a legal team presented the report to parents‚ because the team was not mandated to present the report on camera.

Lesufi said the meeting with the school governing body on Thursday afternoon was difficult.

A teacher was shot dead at a Western Cape primary school on Wednesday.
News
3 years ago

Lesufi said the school is one of the best in the country.

Two teachers from the school were recently accused of racism and assault.

IOL reported an art teacher‚ Nik Muiznieks resigned after he was recorded during a rant directed at some pupils. In the 45-minute rant he allegedly called some of the pupils “black and white monkeys”. He also allegedly asked an Indian pupil where he can buy explosives to blow up the boarding house‚ and also called him “Isis”.

He allegedly resigned after the school started a disciplinary process

Maths literacy teacher Remo Murabito was also accused of assaulting a pupil in class. IOL reported that she allegedly stomped on his foot and slapped him before calling him a “nuisance in my life”.

Theft from a fourth school in Atteridgeville‚ Pretoria‚ has dismayed the Gauteng Department of Education.
News
3 years ago

The school was hit by controversy last year after a former Parktown Boys High School assistant water polo coach was charged with sexually grooming more than 20 pupils in 2015. He was arrested in November 2016 after some of the boys‚ between the ages 15 and 16‚ came forward in early 2017.

Muiznieks allegedly called the pupils who spoke out about the coach “evil” and “snitches”.

Lesufi visited the school in May 2017‚ and said at the time: “We are here to ensure that the incident never occurs again. School is a place of learning and prosperity‚ not discomfort.”

The department said at the time that Lesufi implored the school governing body to “start subjecting candidates to strict HR (human resources) vetting processes prior to their appointment as support staff of schools”.

A hole in the wall‚ dusty roof insulation with a collapsing ceiling‚ and mould on the walls are what greet you when you enter classrooms.
News
3 years ago

"He cannot appear in court if he was never arrested."
News
3 years ago

Child's punishment does not fit crime of lost shoes

I felt tears in my eyes as I read the article titled "Mom in jail for brutal beating of child" on page 6 of yesterday's Sowetan. Can you really ...
Opinion
3 years ago

The Department of Basic Education needs more than R10-billion to fix sanitation and other infrastructure problems at schools.
News
3 years ago

The department could not charge him as it was reported that he resigned from the school in October last year.
News
3 years ago
Next Article