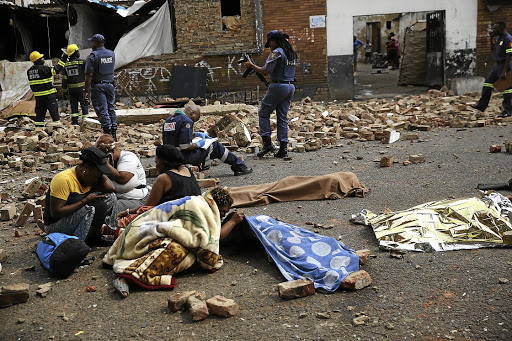 Relatives mourn the loss of young children's lives after a wall collapsed on them while plyaing in Doornfontein, Johannesburg.
Image: ALON SKUY

A father of one of the three children who were crushed dead by a wall in the Johannesburg CBD yesterday helplessly stood next to his son's body overcome by grief.

An emotional Sifiso Ngcobo, 35, whose child Nqubeko Ngcobo, 6, was crushed by a wall on Davis Street in Doornfontein last spoke to his son hours before his death.

"I saw him this morning [yesterday] before going to work and told him that I'll see him later and help him prepare for school because he was meant to be returning to school tomorrow [today]," he said.

Ngcobo was at work when he received a call from one of his neighbours who told him to rush home because his son had sustained serious injuries.

Wall collapse: 'Occupants had been waiting for emergency housing for 8 months'

Families living in an abandoned building where a wall collapsed had been asking the City of Johannesburg for emergency accommodation.
News
4 years ago

"They didn't want to tell me that my son was dead and just said he was injured," Ngcobo said, while standing a few metres away from Nqubeko's body.

"I am hurt and shocked because it's not like he was sick. I would have understood if he had been sick and succumbed to an illness, but this was very sudden and unexpected.

"I can't accept this and don't think I'll be able to come to terms with it any time soon."

Ngcobo's wife, Tholakele Zuma, along with the mothers of Aphiwenkosi Shoba, 10, and Asiphelele Buthelezi, 3, sat next to the bodies of their children for hours before they were taken to the morgue.

The three children were apparently playing next to their home, a dilapidated building, when the two-metre high wall collapsed and crushed them.

An eyewitness, Zanele Zikhalala, who also resides at the building, told Sowetan that the wall tumbled down as Asiphelele's mom was calling him to come home.

"The mother came out a few seconds before and called out for Asiphelele to come inside the house but the wall fell on him. I can only imagine what his mother is going through because she witnessed her son dying," Zikhalala said.

The wall tumbled down shortly after midday.

Shimmering foil covered the bodies of three children who were crushed by a wall in Davis Street in Doornfontein‚ on Monday morning.
News
4 years ago

Another witness, who asked not to be named, explained how he saved his little nephew from serious injury or death.

"I was near... about two metres away from it, playing with my two-year-old nephew," said the visibly shaken man.

"I saw the wall come down and I dragged my nephew away. He was hit by some bricks on his leg but he survived. The wall had a large crack for some time but we never thought this would happen," he said.

"We don't know what triggered its collapse," added the man, saying he heard the children scream as the wall fell on them. It sounded like a big car crash. I don't know if I can still live here," he said.

The additional tragedy to the accident is that it happened as the children were wrapping up the last hours of free playtime ahead of the reopening of public schools today.