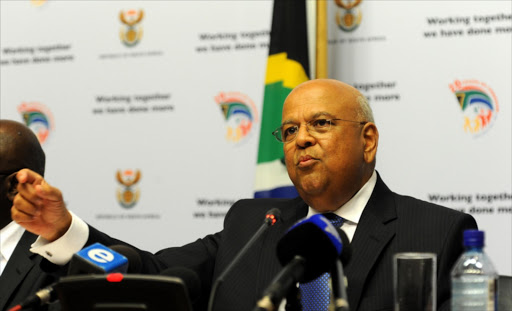 Gordhan was meeting with Denel’s board of directors on Monday.

Denel has been experiencing severe liquidity problems‚ which at one point resulted in the delayed payment of workers’ salaries. The government had to issue the company with an emergency loan guarantee of R580-million to ensure that it paid suppliers and its 4 000 staff.

The company has since been working on a plan with the Department of Public Enterprises and the Treasury to address its issues.

Denel staff assured of payment as Treasury steps in

State-owned arms manufacturer Denel has told unions it has money to pay employees their salaries on 22 December‚ after treasury gave it a debt ...
News
4 years ago

Last month‚ a few days after Gordhan was appointed public enterprises minister‚ Denel board chairman Daniel Mantsha resigned. Mantsha has been implicated in allegations of state capture. No replacement has been announced yet.

In his first state of the nation address‚ following former president Jacob Zuma’s resignation‚ President Cyril Ramaphosa spoke on reconfiguring the way state-owned enterprises operated and how their boards were appointed.

Shortly after that‚ in his first reshuffle of the Cabinet he had inherited from Zuma‚ Ramaphosa axed public enterprises minister Lynne Brown and replaced her with Gordhan.

Brown as well as her predecessor Malusi Gigaba have been accused of peppering the boards of the country’s state-owned enterprises with Gupta associates.

Following his axing as finance minister last year‚ Gordhan stayed on as an MP in Parliament and joined the portfolio committee on public enterprises. He was a formidable force in the portfolio committee as he doggedly grilled those who appeared at the Eskom inquiry about their role in allegations of state capture at the power utility.

In total‚ the company had 1‚557 supplier invoices that had not been paid for 30 days or longer.
Business
4 years ago

During his time as finance minister‚ Gordhan had also locked heads with Denel. This was after Treasury had refused to give the SOE permission to go ahead with its Denel Asia project. Denel Asia was a joint venture between Denel and VR Laser Asia‚ owned by Gupta family associate Salim Essa.

Denel submitted a formal application for approval for Denel Asia under the Public Finance Management Act in December 2015. When it did not get a response within 30 days‚ it went ahead and registered the joint venture company in Hong Kong in January 2016. This resulted in a standoff between Denel’s board and Gordhan.

Denel eventually lodged an application with the High Court in Pretoria in a bid to get a thumbs-up for the venture‚ despite Treasury refusing to sign off on it. The application was eventually withdrawn.

Last year‚ the Organisation for Undoing Tax Abuse (Outa) laid charges of corruption against Mantsha for his role in the Denel Asia venture.