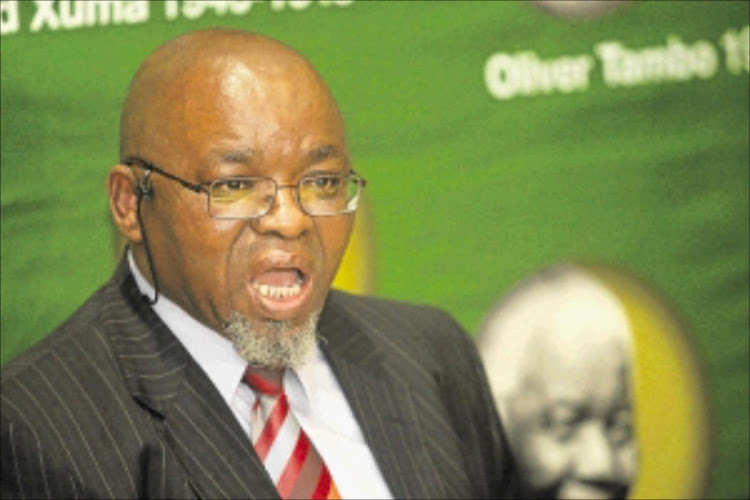 Minister of Mineral Resources Gwede Mantashe has described the horrific killing of six miners in a petrol bomb attack in Burgersfort in Limpopo as a disaster and anarchy.

Speaking during the visit to the area along with various stakeholders on Thursday‚ Mantashe said the suspects' decision was to kill all 50 mineworkers when they threw a petrol bomb into a bus travelling to Modikwa Platinum Mine on Monday night.

"We call on the police to dig deeper in this case. We want to know who is the brain behind the attack and that person must be arrested‚" he said.

The minister blamed the heinous attack on growing unemployment and greed in the area.

He said following the closure of more than five mines in the area some community members had become desperate and greedy.

"Some of these mines have been placed under care and maintenance‚ they are waiting for the price of platinum and chrome to increase then they can open them. We need to start with those mines and get other people to operate those mines and create jobs‚" he said.

Mantashe said he would be meeting with the minister of police‚ Bheki Cele‚ to launch a unit to deal with illegal mining.

"Anarchy must not be allowed to flourish‚" ANC stalwart and current mineral resources minister Gwede Mantashe said on Tuesday‚ as he condemned ...
News
3 years ago

Motsepe revealed that shareholders wanted Modikwa Platinum Mine to be closed because it was not making money.

"There is no money here but we will continue because of our commitment to create and maintain jobs. I'm disturbed about what happened here on Monday‚ why would one of us set a fire to a bus knowing that there are people inside?" he asked.

Motsepe called on faith-based organisations to pray for Burgersfort because it was prone to violence.

Some members of the community suspect the incident is linked to ongoing mining disputes.

Section 21 chairperson John Thokoane said members of the community from Driekop had been raising issues of nepotism‚ corruption and unemployment.

"They say they are not benefiting from Modikwa Mine. We have met with the mayor and traditional leaders on this matter but there is no progress‚" he said.

Thokoane said they were against any form of violence.

Police have arrested five suspects in connection with the petrol bomb attack. They face charges of murder‚ attempted murder‚ and malicious damage to property. Police spokesman Brigadier Motlafela Mojapelo said the five suspects were scheduled to appear in Mecklenburg Magistrate's Court on Thursday but after discussions between the police investigators and the public prosecutor a decision was taken to separate the suspects.

"Only one of the five suspects arrested for the murder of six mine workers has appeared in the Mecklenburg Magistrate's Court today. Kgaogelo Moime ‚ 29‚ was arrested on Tuesday at Balotsaneng‚ Mandagshoek‚ and was remanded in custody.”

Mojapelo said the remaining four would appear in the Praktiseer Magistrate’s Court on Friday.

Rich president or not, it is wrong to steal

ANC chairman Gwede Mantashe saying "the new ANC will fix itself" must rate as the grand summation of the entire debacle and gutter in which the ANC ...
Opinion
3 years ago
Next Article