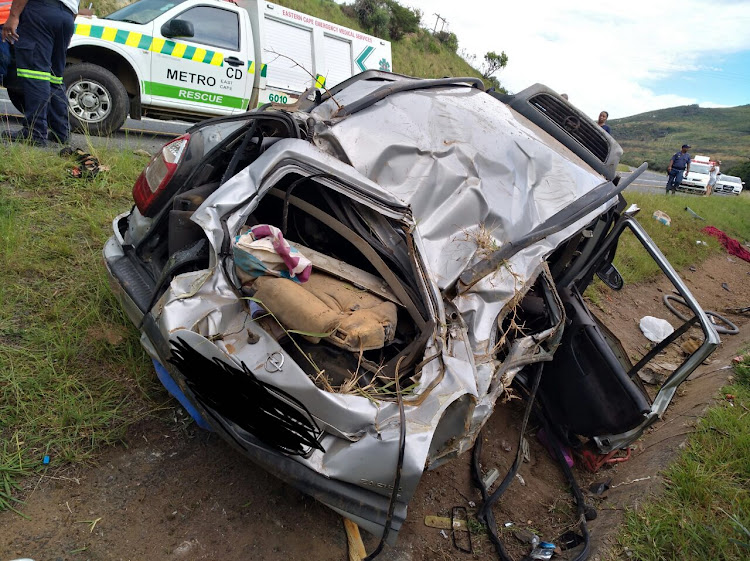 Six people died in an accident near Grahamstown this morning.
Image: Supplied

Six people believed to be members of a single family‚ including three children‚ were killed on Monday morning when the vehicle they were travelling in veered out of control and overturned on the N2 outside Grahamstown in the Eastern Cape.

Two women survived the crash‚ with one of them fighting for her life at Settler's Hospital in Grahamstown‚ said Grahamstown police spokeswoman Captain Mali Govender.

Govender said three minors and three men were killed instantly when the driver of the silver Opel SUV lost control on a sharp curve and the vehicle overturned. Govender said there were eight occupants in the vehicle.

The accident happened after 7am near the famous roadside Stone Crescent Hotel – 12km outside Grahamstown.

Eastern Cape department of transport spokeswoman Khuselwa Rantjie said the eight occupants of the vehicle were believed to be family members who were driving together after an Easter break at their home in Mdantsane.

They were bound for Cape Town where they were staying as migrant workers.

On one of the busiest days travel days of the year‚ an angry mob forced the closure of the N3 at Mooi River Toll Plaza on Monday.
News
4 years ago

“Emergency services personnel are still busy on the scene of the crash. The cause of the crash is not yet known at this stage‚” said Rantjie. The silver car was pulling a trailer.

Govender said: “A case of culpable homicide is being investigated following an accident on the N2 past Grahamstown toward Port Elizabeth this morning. Two other persons (females) are receiving medical treatment at a local hospital one of whom is in a critical condition.”

Govender said the cause of the accident was yet not known and would form part of the police investigation.

Grahamstown police cluster commander Brigadier David Kanuka has expressed his condolences to the family of the victims.

“My deepest condolences to the bereaved family. Senior officers from the SAPS are at the scene. We will provide whatever support that is needed to the family following this horrific incident.”

Govender said top police investigators and specialists were at the scene which had been declared a disaster.

On one of the busiest days travel days of the year‚ an angry mob forced the closure of the N3 at Mooi River Toll Plaza on Monday.
News
4 years ago
Next Article