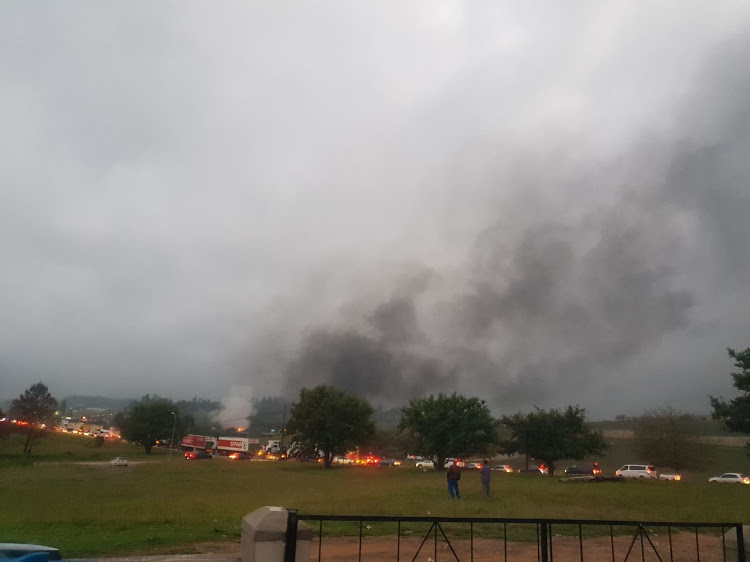 Columns of smoke rise from burning trucks on the N3 highway at the Mooi River Toll, where rioters ran rampant on Monday.
Image: Supplied

On one of the busiest days travel days of the year‚ an angry mob forced the closure of the N3 at Mooi River Toll Plaza on Monday.

Several trucks were burnt as part of the protest.

It is understood that a group from Bruntville‚ which lies adjacent to the freeway near Mooi River in the KwaZulu-Natal Midlands‚ had first put the torch to a truck which had stopped at the toll in the early hours of the morning.

A source who spoke to TimesLIVE on condition of anonymity said that a truck carrying liquor had broken down and that at some point a gang had started to loot it.

“They were stealing liquor and then other truck drivers came to help and then they just started burning the trucks‚” he said.

“There is nothing political about this. It’s just criminal‚” he added.

Black is the powerful colour linked to protest

Often associated with death, devils and mourning - the colour black has slowly transcended to send a profound message the world over. Johnny Cash ...
Lifestyle
4 years ago

Since then the N3 and parts of the R103 were closed.

The N3 Toll Concession and SAPS confirmed the protest action and road closures.

"Please be warned that roads around Mooi River is closed and completely inaccessible. Protesters at Mooi River toll gate. The R62‚ R103 and the N3 north and south bound is closed‚" police said on their official Twitter account.

The official @N3Route account also posted: "Protest action taking place in the vicinity of #MooiPlaza. Total road closure. Please delay your trips. We urge all drivers to be extremely cautious."

#MooiRiver #ProtestAction turns into looting - the N3, the R103 and other local routes remain closed pic.twitter.com/jtHpXreYDy