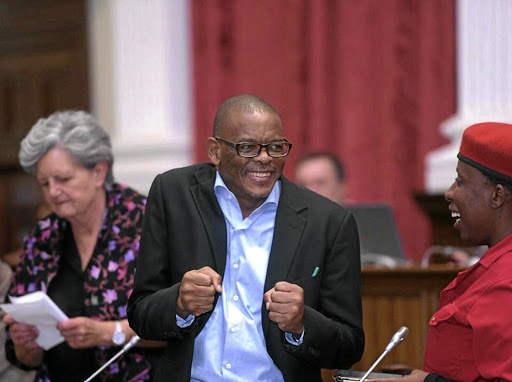 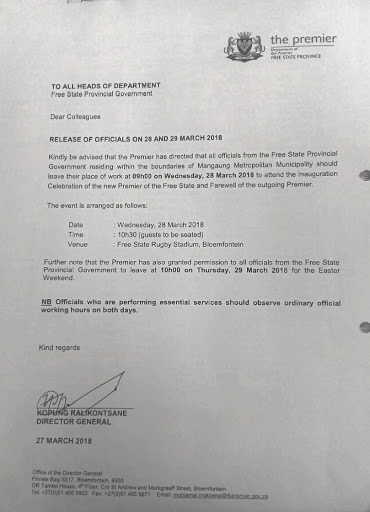 ANC secretary-general Ace Magashule has instructed government workers in Bloemfontein to leave work by 9am today to attend his R20-million farewell party.

Magashule is outgoing premier of the Free State government following his election as secretary-general at the ANC's conference in December.

A letter signed by the provincial director-general Kopung Ralikontsane, seen by Sowetan, stated that Magashule had instructed that all
officials from the provincial government residing within the boundaries of Mangaung metropolitan municipality leave their place of work by 9am today to attend the inauguration of new premier Sisi Ntombela and Magashule's farewell.

The event is taking place at Free State Rugby Stadium in Bloemfontein.

Ntombela was sworn in as premier yesterday late afternoon while the letter was circulated to workers earlier in the day.

Ace Magashule and Jessie Duarte have come under fire for pushing for the dissolution of the Eastern Cape ANC PEC.
News
4 years ago

ANC spokesman Pule Mabe defended Magashule, claiming the former premier played no part in planning the inauguration today. "It is now the prerogative of provincial governments, and the Free State administration had planned to introduce the new premier and the affected provincial administrations have designed programmes on how they intend introducing the new premiers to the citizens of their provinces," said Mabe.

The letter further stated that Magashule has also granted permission to all officials from provincial government to leave work at 10am tomorrow for the Easter weekend.

Yesterday, the EFF in the province said it was disturbed and appalled to learn of the planned extravaganza meant to usher in Ntombela and bid Magashule farewell.

EFF provincial chairman Kgotso Morapela claimed that they had also been reliably informed of the instruction "issued by Magashule himself", for all mayors and municipalities in the province to mobilise people and arrange transport that would take hundreds of people to the stadium at a cost of more than R20-million to the provincial government.

"This instruction is issued at a time when Free State municipalities owe both Eskom and Water Boards hundreds of millions of rands in unpaid bills.

The City of uMhlathuze has accused the DA of a “huge misrepresentation of facts” after the party claimed the municipality was spending R20-million on ...
News
4 years ago

"In all the municipalities, service delivery has collapsed, with garbage piling up everywhere and streets overflowing with raw sewage," he said. "The EFF therefore feels vindicated for considering Sisi Ntombela's appointment as just another extension of Ace Magashule's corrupt administration ..."

The DA in the province said there's no justification for this amount of money being spent on Magashule's farewell as that would not eradicate poverty. The official opposition also confirmed that Ntombela was sworn in as premier yesterday just before 4pm.

"Ace Magashule already enjoyed a R3-million farewell function disguised as his state of the province address last month. It is quite ridiculous that more money will be wasted on an inauguration ceremony for a new premier.

"The DA is strongly opposed to the appropriation of funds for a purpose that will not improve the lives of the people of the Free State," said the DA's Roy Jankielsohn.