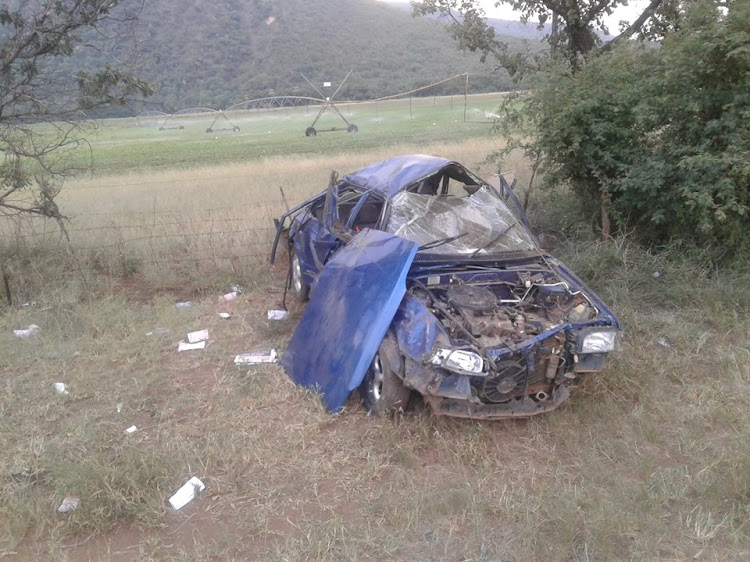 Four people died in a car accident allegedly after being chased by a taxi association patrol for giving a lift to a hitchhiker in Dennilton, Limpopo.
Image: FACEBOOK/Kgaga Charles

A family has been left distraught after one of their loved ones died in a car accident allegedly caused by a taxi association patrol vehicle in Dennilton‚ Limpopo.

The family and community members allege the accident took place when a Dennilton Taxi Association (DTA) patrol vehicle chased their uncle after he gave a lift to hitchhikers last week. Lillian Mathabela‚ 31‚ who lost her uncle in the accident that killed two other people‚ blamed the DTA for his death.

“The family is hurt. We have lost an important member of the family. He left four children and his unemployed wife. I don’t know how she will make ends meet.

“On top of the pain‚ the people who put us in this situation do not care. They have treated the family with great disrespect and disregard. How can they stand with the murderer? They have put this community in so much distress already‚” said Mathabela.

The families buried their loved ones on Saturday.

Because of the incident‚ the community of Dennilton is up in arms‚ seeking justice for the victims and an end to what it calls the historical ill-treatment and “capture” of commuters.

Four died after being chased by taxi patrol in dennilton along Road 25..may their souls rest in peace

The R25 – “Road of Death in Moutse. Friday when three people were killed in a horrific accident on the road, and no...

In their memorandum of demands to the Limpopo MEC for Transport and Community Safety‚ Makoma Makhurupetja‚ the community said the taxi drivers appear to be of the opinion that they rule the roads‚ blocking block commuters from boarding private vehicles.

They demanded that the patrol cars cease to operate‚ that the taxi association cover the funeral costs and that criminal charges be instituted against those directly responsible for the deaths.

South African Commuters Organisation (SACO) president Stephen Sangweni said public transport was in “junk status” as the government was not committed to resolving the hostility and violence in the taxi industry.

“The interest of commuters was never taken serious by the government‚ in fact they tiptoe around the issue because they are scared of the taxi guys. There is no willingness to address the violence and victimisation of commuters. It’s unbelievable that we are still discussing the issue of commuters’ safety in this day and age‚” said Sangweni.

Only government had the capacity to tackle the matter‚ but it had no interest in improving public transport‚ he said.

A Dennilton community leader who asked not to be named due to fear of intimidation‚ said those allegedly responsible had shown no remorse for the incident.

“They don’t want to accept that one of them did this because they are arrogant‚ they have too much power in their hands. They have gone as far as intimidating our young people who posted on social media about the issue‚” said the leader.

He said that though they have engaged the MEC on the ongoing victimisation‚ nothing had changed.

The taxi association has denied the claims.

Spatle Matea‚ DTA secretary‚ denied the association was arrogant and said it had been wrongfully accused.

“It’s not true. Our internal investigations revealed that it was not our member. But we are leaving the case to the police. We did not threaten anyone‚ we are actually working hand in hand with the community on this matter‚” said Matea.

Limpopo police are investigating a case of culpable homicide. No arrests have been made yet.