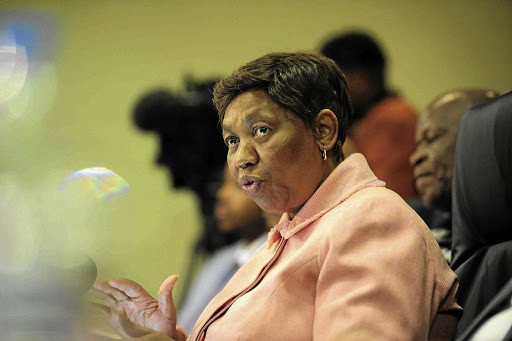 The Department of Basic Education needs more than R10-billion to fix sanitation and other infrastructure problems at schools. Limpopo alone needs R3-billion to fix toilets.

She was speaking during an urgent Council of Education Ministers held in Kempton Park, on the East Rand, where she said more than R10-billion was needed to deal with issues of sanitation at schools in South Africa.

The meeting which was attended by all provincial MECs, except for Gauteng's and Western Cape's, came a week after the death of Lumka Mkhethwa, who fell into a pit toilet at the Luna Primary School in Bizana, Eastern Cape and drowned.

Litlle Lumka Mthethwa, 5, of Bizana died in the broken pit latrine of her school on Monday.
News
4 years ago

Motshekga said the meeting was not a reaction to the tragic death of Lumka but the tragedy had forced them to review their plans.

However, Equal Education's Leanne Jansen-Thomas said pit toilets should have been eradicated by November 29 2016, which was the deadline stipulated by norms and standards set by Motshekga for all the MECs of education after they missed the initial 2013 deadline to have all pit toilets eradicated at schools.

"The commitment by the minister to prioritise pit toilets is two years late. It's not the matter of where to find the funds but they should spend the available funds effectively," Jansen-Thomas said.

"However, that is something they have been unable to do. They don't just need proper costing but also need capacity and expertise to spend the money properly."

Motshekga said the aim of the Council of Education Ministers' meeting was to discuss how they would work together to provide a sector response to ensure that they provided safe and dignified ablution facilities at schools as a matter of urgency.

The provincial government must publicly account for the "continuing appalling state of many schools in the Eastern Cape".
News
4 years ago

"The loss of an innocent young child is a truly painful experience. We share in the pain, suffering and trauma associated with the death of Mkhethwa.

"It has again drawn our attention to the challenges we face in the area of sanitation and ablution and the safety and wellbeing of our pupils in particular," Motshekga said.

"We already have an existing plan in place that is intended to eradicate these unsafe and inadequate toilets."

Motshekga said in rural provinces such as Eastern Cape, KwaZulu-Natal and Limpopo, the installation of flushing toilets was not a viable option because of the lack of bulk water supply.

She also said a full investigation would be instituted to find out who was responsible for Lumka's death.

Free State MEC Tate Makgoe said: "We can re-look at our own budget and a certain percentage must be used to prioritise sanitation and do away with this danger in our community.

Lumka Mkhethwa from the Luna Primary School in Bizana‚ in the Eastern Cape‚ fell into a pit latrine and died on Tuesday.
News
4 years ago

"We have set up a team of the heads of departments to go and audit correctly what still needs to be done."

The meeting resolved to conduct a rapid audit of all sanitation and ablution facilities in schools.

All schools without sanitation would be addressed as a matter of urgency and pit toilets would be demolished.

A comprehensive cost plan informed by the audit report of all the needs identified for sanitation and ablution facilities would be submitted to President Cyril Ramaphosa within three months.